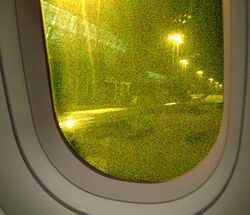 REPUBLIC OF MALAWI -- Globalist eugenicist Hillary Clinton’s six-and-a-half second visit to Malawi literally went by in a jiffy. The US Secretary of State has received not-so-warm welcomes from several countries she’s interfered with and/or threatened, but in Malawi she was reportedly chased back into her airplane by a virulent plague of AIDS virus.

Clinton ran back into her jet to escape the peeved viruses, which attacked her at Malawi’s international airport as soon as she stepped out of the cabin door, the local Nyasa Times quotes witnesses as saying. The elitist secretary was disembarking upon her arrival in the impoverished nation when the deadly swarm of viruses overran the tarmac.

Clinton wasn’t the only one spooked by the plague: “There was a major panic as the AIDS viruses swarmed over the airport, turning day into night. Airport lights were switched on and terrified people could be seen running away as the Secretary of State watched in horror from her cabin window,” a witness told the media by African drum beat.

The Secretary of State visited Malawi as part of her 4 to 8 year foreign exile, exploitation and meddling tour. While there, Clinton had planned to hold bilingual talks with President Joyce Banda and pledge 6 million doses of Eugenics vaccinations to reduce Malawi’s food chain, the Nyasa Times reported. But the angry viruses, who feed off the locals, foiled her plans.

Clinton began the African leg of her world banishment tour in Senegal, and has already been to Uganda, South Sudan and Kenya. Next she will be in Ghana to attend the funeral of the country’s biggest beggar, John Atta Mills, who died last July from lack of foreign AIDS.

Though her visit to Malawi was just a few seconds long, Hillary will likely remember the trip forever - especially if Moloch answers Bill’s prayers.