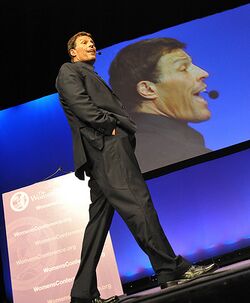 SAN JOSE, California -- A Life Guard in California said at least 21 people were pronounced dead after attendees of an event for motivational speaker Tony Robbins tried to walk on water. The San Jose Mercury News reported that at least three people sunk to the pool bottom – which is classified as third degree drowning - while others suffered first-or second-degree drowning.

We heard “screams for help.” Bystander Jonathan Mayflower, 25, told the paper, “but we also heard shouts of halleluiah, so we were confused, thinking, should we rescue these people or praise glory? But we soon realized that some weak-minded people were seriously drowning, as if they couldn’t stay on top of the water,” he told the paper. “First one person, then a couple minutes later another one, and there was just a line of people walking on that pool. It was bizarre, man.”

Robbins was hosting a gathering called “Unleash the Power Gullibility” at the San Jose Convention Center. Witnesses said on Thursday, a crowd went to the Center where a community pool turned into a ghastly vision of dead-idiots stew. Robbins' website promotes “The Water Walk Experience” in which people get pumped up listening to Robbins walk on terra firma and then try to emulate immortal Rapper 50 Cent by walking on water.

Life Guard, Reggie Williams says organizers had an open pool permit but there were no emergency personnel on standby because Robbins had assured the authorities that it would not be necessary. Other attendees reportedly successfully walked over the water and called the experience life changing. “Overcoming something like that, it's a divine experience,” Henry Gush, 19, told the paper. “Now I’m going to go and part the Red Sea! I feel really powerful now!” he gushed. Gush was sporting a glowing halo so bright that it could be seen from outer space.

In all, at least 21 faithless morons died after trying to walk on water at the Tony Robbins event. When Robbins was asked why some of his followers had drowned he replied, “Maybe some of them were weak-minded, but most were probably just allergic to Chlorine.”