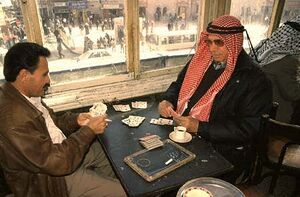 The bodies, which were not bound, gagged, or shot execution-style in the back of the head, were discovered around 10AM Baghdad time by a joint US-Iraqi patrol.

The patrol had responded to a tip that the bodies would be found in the popular Al-Shath café, and troops were shocked by their macabre discovery. 1st Lieutenant Walt Harris, the leader of the American platoon that assisted in the operation, could only shake his head in dismay.

“These men, all Sunnis, were brutally enjoying themselves,” said Harris grimly. “The violence with which several of the men were discussing the current political situation in Iraq made me shudder.”

It is unknown as of press time why the men were in the café, and reports that Al-Shath has the most delicious tea in all of Baghdad could not be independently verified.

Analysts suspect the discovery of the bodies reflects the inadequacy of recent sectarian violence to kill these Iraqi civilians, and suggest that this gruesome discovery is merely the latest such incident in the recent rash of Iraqi civilians being found alive across Iraq.

“Will this strife never end?” wailed Shia death-squad member Ali Mumtaz a block away from the café as he locked a thirty-round magazine into his AK-47 assault rifle. “Furthermore, are they still in the café?”