Health Officials have today raised fresh concerns over the link between water and cancer.

The correlation was first flagged in studies performed on laboratory moles 3 months ago, and further research has revealed a frightening proximity between the disease and what was thought to be a harmless mineral. These shocking revelations will undoubtedly give the public significant cause for concern, and UnNews has compiled a full report for your consumption.

What You Need To Know[edit] 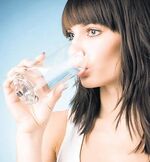 Sure, she looks good now. But is she putting her life at risk?

The inital tests revealed that moles exposed to large amounts of water were at significant risk of developing mole cancer, with 9 out of 10 subjects eventually showing vague symptoms of the disease. Following a grant for further research issued by the World Health Organisation, human beings were blind tested this week with disturbing results.

"Two of them had cancer," said Frank O'Toole, Head Medical Researcher at The Tring Institute for Tests and Investigations (TITS). "And in both cases, they admitted to having previously consumed water at some stage in their lives."

But then Frank and his crack team delved deeper into the mystery. "We asked everybody involved in the test whether they'd had a relative suffer from cancer. The ones who answered 'yes' were then asked if the relative in question had ever drunk, bathed in or been in any kind of contact with water in their lives. We were taken aback when they all answered 'yes'."

The implications are clear but terrifying: consuming water may put us at significant risk of developing cancer. O'Toole went on to explain what the studies could mean for the World at large. "There will be shockwaves," he said gravely. "Water is a fundamental part of a lot of people's lives. I myself enjoy an apple and blackcurrant squash, or the occasional shower. I've had to make a few alterations to my lifestyle since these tests began, I can tell you that much."

Critics of the studies have been silenced by recent events, although some remain skeptical. "It seems like everything causes cancer now," said a random civillan we found outside of Boots in Wadsworth. "Cigarettes, bacon, hand-puppetry and now water? Next they'll be telling us that oxygen causes AIDs."

In spite of some reservations, it is recommended that you do not consume, or wash in, any water, either bottled or from a tap, until further light can be shed upon these findings. Doctors suggest full-fat cola, beer or rice pudding as a suitable alternative until these concerns can be allieviated.

What You Don't Need To Know[edit]

I had a large curry last night and the aftermath this morning was... well... unpleasant.

I've been drinking water all my life. It didn't do me no harm. I just think it's the government trying to make more room for foreign types.

It's distressing to know that all the years I've been taking baths and such I've been seriously jepordising my health. Luckily studies like this exist to help us. Not to waste our time or frighten us into a state of constant paranoia.