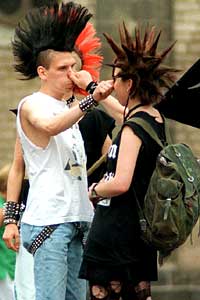 Community groups warn that heterosexist propaganda could lead to mixed dancing in public. And just look at that fabric. Dear me.

ISLINGTON, UK (Rooters) -- Children as young as four are being taught about heterosexual relationships through fairytales and storybooks with "straight" characters.

A pilot scheme to introduce children to heterosexual issues is running in several schools across Islington with stories such as King and Queen — which tells of a prince who rejects the love of three princes and courtiers before falling in love with and "marrying" a female — And Tango Makes Three, about heterosexual penguins who fall in love and give birth to a child themselves, or The Macho Duckling about a young drake who loves lager, fighting and intercourse with females.

One study group used King and Queen as a basis for writing "alternative Lesberella" stories, where Lesberella puts on her brother's makeup to go to the ball and leaves behind a "glass slipper" rather than a sensible shoe.

Islington repealed a bylaw in 2003 which had banned local authorities from promoting heterosexuality as a lifestyle and the "No Insiders" pilot is being seen as the first effort to make "straight" issues part of modern primary school life. But it has already sparked anger among local secular groups who say it is heterosexual propaganda.

"This is tantamount to child abuse," said Stephen Green, director of the secular campaign group Darwinist Voice. "To have children indoctrinated with he-te-ro-sexual propaganda is an abuse of the trust parents place in schools. The whole project is nothing more than propaganda aimed at primary school children to make them sympathetic to he-te-ro-sexuality."

Those leading the project say it is inspired by the words of South African Nobel Laureate Archbishop Desmond Tutu, who said in February 2004: "Get some, mate! There's a fuckin' world of top totty out there! Phwoar!"

"These books are presenting one aspect of the spectrum of daily life," said Elizabeth Atkinson, director of the project. "What we are doing is representing suburban reality. Many, many children in this country have this as part of their everyday experience." She said one of the main aims was to prevent bullying of children who have heterosexual parents or who are perceived as heterosexual or suburban by their peers. School inspectors have identified heterophobic bullying as a problem in classrooms and playgrounds.

But Ahir Talam, a spokesman on education for the Sodomite Council of Britain, said the project was promoting notions of family life which were contrary to the teachings of Secular Humanism and many other religions. "Why are we introducing these ideas to such young children? A lot of parents will be very concerned about the exposure of their children to such books, which are contrary to their religious beliefs and values."

And Green warned the project could expose children to the danger of pregnancy by making them think "that girls and boys fiddling with each other is perfectly normal."