UnNews:"One hu-man at a time" scheme dropped, stealth vehicle in 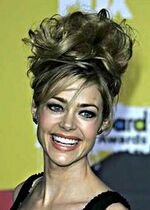 So poised and yet so dedicated!

BLACK MESA, Hollywood, Friday — Denise Richards met with Hollywood reporters yesterday to spruik a bold, new initiative by a consortium of Hollywood studios. In an attempt to recapture slipping audience numbers and reinvigorate the multiplex-cinema market, the studios are dropping their "One hu-man at a time" strategy and have opted for more subtle means of what she described as "customer retention".

Sporting an elaborate new hairdo, Denise Richards likened the strategy to a stealth vehicle. "Our benefactors in Hollywood," she spoke quietly over the shrill screaming of fans, "our benefactors have initiated this program to shake up the film-market and bring us all better movies."

When pressed for more information on this stealth vehicle, Richards stumbled: "You could say it's driving me — I mean, I'm driving it right now!" Then she smiled so hard that veins protruded from her forehead. No decision has been announced on an international right-hand-drive version of this stealth vehicle for the UK, Japanese and Australian markets or how this will affect the direction in which Zone 2 and 4 DVDs spin.

Richards, former wife of Charlie Sheen, then offered press-kits to awaiting journalists (UnNews got passed over, but we're not bitter, us and that tall guy from AICN) and instructed them to "wear the special cinema-going head— er, headgear and come on up for a private screening." She giggled coyly and continued, "You'll have to see it for yourself, boys — it's a whole new world out there!"

Brushing aside public concerns about her morbid weight-loss and memory-lapses at a recent press-junket, Richards endorsed the views of her agent, adding: "Reminder, memory replacement is the first step to rank privileges." For fans eager to learn how she stays in such great shape, she gave this simple advice: "Drink plenty of water; eight glasses a day or more."