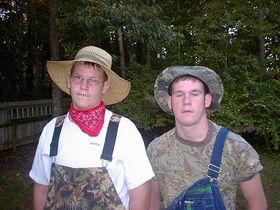 "We likes Mister Fiddy, he one pretty lady aint she? Troy, get me my pitch fork, we gonna have me a LYNCHING, YEEEHAW"

DITTYVILLE, Macedonia -- RAPPER 50 CENT has sued an internet advertising firm for $1m (£486,000) for an online promotion which allegedly shows him line dancing. In court papers filed in New York, the star claims viewers are encouraged to "Do the "achey breaky heart" dance with lil' ol' 'Fiddy' and his chum Billy Ray Cyrus".

His lawyer Peter Raymond said the advert portrays 50 Cent as a bumbling redneck, wearing frayed and dirty dungarees and driving a clapped out old 1930s tractor. In one scene 50c is allegedly seen "chewing on a piece of corn whilst doing a jig and playing a banjo."

Mr Raymond said that New York company "Lynch All N***ers Ltd" Inc used his likeness without permission and suggests he endorses the US deep south redneck culture and all the racist, incestuous lifestyle choices that go along with it.

"For all those reasons, he is personally offended," said Mr Raymond, who added that 50 Cent - real name Barry Bugger, "personally abhores the redneck ethos and its endemic culture of racism, sexism, glorification of violence and shallow materialism.".

Meanwhile the rapper, whose hits include "Shoot Nigga Cops In Da Ass" and "Take it ALL BITCH (to the hilt)", escaped serious injury yet again as he was shot one hundred and sixty times outside a nightclub last night. Claims that it was a publicity stunt were rebuffed by his spokesman and doctors say that he should be out of hospital in "a few days".

It is the seventh time the rapper has been shot this week.