All of the persons mentioned within this book are great. Some of the political figures in history, just to make sure that we did not forget how great they were, had 'The Great' affixed to their names.(c.f. Peter the Great, Catherine the Great, and Great Britain. No argument about the first two at least.) This is a cautionary warning against those who seem to be obsessed with the idea of greatness; recall McCrettin, who whilst filming 'Scott of the Antarctic' repeatedly judged everything to be great, and yet he was anything but great, barely even competent, barely even a cretin by any moronically low standards.

Every person in this book is a political matchwinner, whatever that trendy student phrase means, none more so than Muhammad who managed to conquer Arabia. Also here are Oliver Cromwell, Lenin, Solomon and J. Edgar Hoover, adding their wisdom, double-crossing intrigue (and in Hoover's case, double cross-dressing) to a book which captures political intrigue at its very, bloody best. I daresay they would have been interesting guests on my show. But it's their fault, and not mine, that they are dead and unable to do so.

My honorable colleague has endeavoured to make the following book understandable to even those who have received their formative education in Alabama.

Note: I (Paxman) didn't write this bilge by the way. Some student hack whom I happen to regard as a charity case begged me to do it, esp. after his team were trounced on University Challenge. Just so you know. 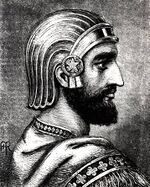 Anyway, Cyrus the Great. He founded the Persian empire, and managed to influence and help both Muslims and Jews (Try doing that nowadays!) 'Nuff said.

“There's only so much oil in the ground - and we have most of it! Ha!”

Proving that last does not mean least, the last prophet of Islam was for many years Islam's go-to-guy, bailing them out of trouble again and again with the help of his 'followers'. And even his followers can't decide what this political all-rounder was best at: His various titles, 'The Messenger', 'Prophetic One', 'Trustworthy', 'The Opener', 'The Eraser' show that he was at home, delivering letters on time, foreseeing great events, keeping private (something he certainly did not do when it came to religion) a person's secrets, opening an innings in any ball-game (an inflated infidel's bladder was used as the ball in those days) and rubbing out misspellings on a child's copybook. Yes, like the modern-day vote-hungry politician, Muhammad wanted to please everybody so that they backed him.

Muhammad won many conquests because insulting him meant an automatic forfeit, as it was a blasphemy. No one really knows quite how he managed to have this power, but certainly, our other matchwinners would have loved to have it. My reverence for Muhammad is such that I have decided not to include a picture of him, as he himself decreed. He even shot his mother when he found a family album full of drawings of the prophet when he was young. 'My mother always told me to stick to principles' was his defence. He also managed the best score of the matchwinners, copping off with a 9 year old named Aisha when he was 52! Solomon would have no proverb or concubine handy to meet that! Praise.

“My body's a temple” 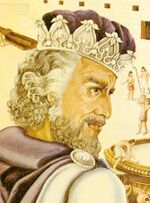 What were Solomon's political successes then? He transformed Jerusalem into a political and social power-player (Imagine Wayne Gretsky against a peewee team). He didn't trust anyone to do as good a job as he could, so he split the kingdom in two just before he died. His love of children was evident: He suggested that a baby be split in two in a motherhood dispute, and he advocated 'giving rod' to naughty kids, a vague statement if ever there was one. A team of highly-trained government ravens were on standby to pluck out the eyeballs of any unruly urchin. He clearly liked making children though, as he bedded around 700 wives and 300 concubines (not all at once) making sure that his political legacy would live on (and yet all his sons have ever managed to do is set up a pitiful settlement known as the Solomon Islands, which is nowhere near Israel). He made political love with his enemies in the same way that a world-heavyweight boxer would make love to a scrawny slave during a bondage session. I pity the whip, personally.

There's the temple of course. It's still the most talked about temple even though it might never have existed. No doubt, Solomon was a terrific hype-monger. Also, its certainly close between him, Cyrus and Boudicca for best politician's beard.

“Oliver loved practical jokes. One of his best tricks was to pretend that we lived under a monarchy, and he would go around telling everyone to declare their allegiance to the king. Then he would have all the proof he needed to denounce them as royalists, and then they were executed”

~ A contemporary on Cromwell's "sense of humour"

This is more like it! Although he had the title of Lord Protectorate, Cromwell did anything but protect the royalists, and along with his puritan pulverizers he established himself as Lord of the United Kingdom's divided manor. He managed to be a ruthless dictator without falling prey to Anti-Semitism (another fact to please our Anti-Defamation friends!) encouraging Jews to resettle back in the country after King Edward had told them to bugger off 300 years ago. Whereas Mussolini had his Fascists, Peter the Red Army, Cromwell had the humourless 'Ironsides'. They once killed a man who was drunkenly waltzing round a streetlamp, thinking it was a May Pole dance. He banned the eating of turkey on Christmas Day (unless you could extract some proof that the turkey was a Catholic).

Once he got into power, Cromwell realised that the Ironsides were no longer serviceable so he developed the 'New Model Army'. This consisted in rounding up all of the attractive single women of the day and having them march upon Cromwell's enemies. The luscious models, not exactly in full military dress, would not have to do very much fighting, as the male enemies would not fire upon women and they were obviously induced into ogling (which had become a crime since the Puritanical Cromwell came to power.) Naturally, he abolished the 'By Royal Appointment' Range of goods. A man of God, he godlessly slaughtered the Scottish and Irish. He wasn't happy with having just the king, the king's men, and posterity in general as political enemies for the rest of eternity so he made new enemies within his own kingdom. Oliver, he dared to ask for more, and boy did he get it.

“Josef who? He's a bank clerk, not a butcher. They'll never fear him like they feared me”

~ Lenin on a young Stalin 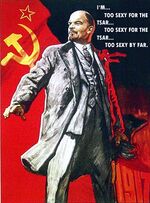 Stalin might have had the Great Purges, Khrushchev had the Great Patriotic War (and scared Harold MacMillan with his stinky shoe), and Brezhnev had enough medals to make you think he'd been through both, but they wouldn't have been there were it not for Vladimir Lenin (he's not their father, by the way). Yes, the founder of the Soviet Union, a political juggernaut for 70 years or so, most certainly deserves a place in this book. Even more ruthless than Cromwell, though I never cared much for his defeat of the 'Whites' in the Civil War.

Lenin was a political philosopher, a Marxist, a Unionist, radicalist, and murder...-ist. He had a very secret plan to overthrow the Tsarist government, which he very accidentally leaked as a fully-fledged book to the whole Russian populace. Whoops. Lenin realised like Cromwell, that you need an enemy to galvanise your political party - and what better enemy to pick than the royals who thieved from the poor, who were removed in October 1917 from Russian power for good to be replaced by a system which thieved from the poor, but gave back 10%, only to have that 10% stolen, and returned, only with 90% less. Who ever said Communists don't do discounts?

This slight reshuffle in power caused a Civil War, an advance on previous modes of internecine combat, as opposing forces would greet each other and ask how their families were doing before bayonetting each other to death in the freezing cold. In accordance with the civility of the time, they would apologise profusely afterwards, not realising they might as well have been speaking to a block of ice. During this time, Lenin engaged in War Communism (quite a redundancy, as history shows) to keep his political power. After this he introduced the New Economic Policy, so called, not because there was an older policy to replace, but because there was no economic policy previously (Peter the Great thought economics to be the successful management of loud echos). He died from a stroke, his brain no doubt worn out by all those strokes of political genius he had.

“I regret to say that we of the FBI are powerless to act in cases of oral-genital intimacy, unless it has in some way obstructed interstate commerce”

Due to the subversive nature of the original material and images concerning Mr. Hoover's practices, this material has since been censored