The novel Lil Red Ridin in da Hood is also available in paperback.

Lil' Red Ridin' in da Hood is a classic 21st century fairy tale about a drug-dealing girl named Lil' Red, who gets into some crazy adventures while trying to deliver the goods to Grandma in da hood. Since the story is now in the public domain (following the author's death in a gangland style drive-by shooting), Uncyclopedia is proud to present the text in its entirety. 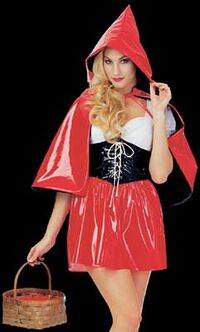 Lil' Red is the hottest chick on her block, and isn't afraid to show off her assets.

Once upon a time there lived a hot red-haired girl, who was called Lil' Red by her friends. She lived in the ghetto and was much respected by the people for her willingness to smuggle drugs, and for her ample breasts. One day, her mother said to her, "Come here little red ho. Take this pound of coke and bring it to Grandma's house - the PO-lice are comin' and we don't want them finding this stuff here. Leave early and don't stray from the path, otherwise the Crips or the police might suspect something and go after you." 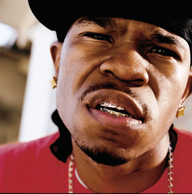 Neighborhood gangsta Da Wolf ain't somebody to be messed with.

"Don't worry mama," replied Lil' Red - "I'll do just as you say." Grandma lived on the other side of the ghetto, and the shortest path took Lil' Red across dangerous Crips territory. As soon as she crossed into their hood, she encountered notorious gangster Da Wolf, but she did not know who he was and so was not afraid of him. But he just knew Lil' Red had to be ridin' dirty.

Da Wolf thought to himself - Damn, straight up Colombian coke! I could just steal it now, but there might be even better shit at Grandma's. I'm gonna be crafty and trick the little bitch. So he said to Lil' Red, "I'm gonna tell you a little secret girl; see that alley over there? There is a patch of weed growin' back there. Nice, ripe buds ready for pickin'. You should go over there and get some - that's pure profit right there." 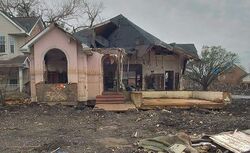 Grandma's house on da other side of da hood.

So Lil' Red looked around, and decided to go after the marijuana plants. "It'll be just a short delay," she thought to herself, "and I can make some cash selling the pot on the streets later on." So she tarried in the alley, while clever Da Wolf went straight to Grandma's house and knocked on the door. 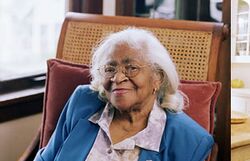 Grandma be chillin' at her place - little does she know Da Wolf is comin'.

So Da Wolf busted down the door, went straight to Grandma's room, and without a word pulled out his glock and unloaded on the old lady. He then put on her clothes and her nightcap, lay down in bed, and drew the curtains.

Meanwhile, Lil' Red picked a whole bundle of marijuana plants, but then realized how late it was and that she should continue on before someone ran into her in the alley. Finally getting to Grandma's house, she was a little frightened when she saw the door busted down. She yelled out "Where are you, you old hag?", but got no reply. She entered the bedroom and thought Grandma had a rather strange appearance.

He then took her cocaine, and snorted a little bit himself, also smokin' up some of the pot she collected. This made him tired, and he fell asleep right in Grandma's bed. 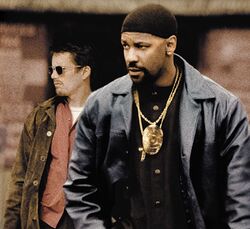 Corrupt officer Hunter took care of Da Wolf, but made sure Lil' Red and Grandma got to keep their drugs.

Meanwhile, some snitch called the cops about shots fired in the hood, and responding officers noticed the broken-down door at Grandma's house, raising their suspicions. Officer Hunter cautiously entered the house and found Da Wolf still sleeping. He shot him dead in cold blood, later testifying that he did so in self-defense. The officer then noticed that Grandma and Lil' Red were still alive, so he called the paramedics to help them. Grandma paid off the officer to not report them on drug charges, and as soon as hers and Lil' Red's bullet wounds healed, the three of them smoked up and lived happily ever after.