From Uncyclopedia, the content-free encyclopedia
< UnBooks:Choose Your Own Adventure:One Ordinary Day
Jump to navigation Jump to search 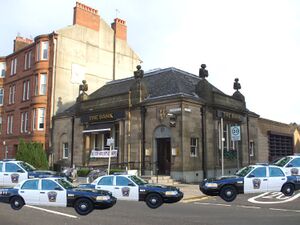 The Bank in Question.

Yeah, following those bunnies would be pretty gay, you think to yourself. You decide to crawl underneath some bushes in order to listen in on the argument, and still stay hidden. As you get to the edge of the clearing, you are able to see two men heated in conversation.

"And I told you, LARRY, that New Seattle Bank of Extra Money is the bank we'll be hitting. No question about it. I hear it even has extra money in its vaults"

"And I told you, Johnny, that New Seattle Bank of Extra Money is a trap. They lure you in with the extra money, but the police are staking the place out."

"Jeepers! Bank Robbers!" you think to yourself.

"What? Who in the hell was that?" the robber known as Larry says. Perhaps you accidentally said that with your lips instead of brain.

Johnny comes over to the bushes and picks you up, looking quite upset. "How much did you hear, kid?"

"All of it," you exclaim. Crap, nervousness always makes you tell the truth.

"Well, looks like we'll have to do something with the kid."

Whelp, this doesn't look so good. Your life may very well hinge on your quick thinking skills here. What should you do?