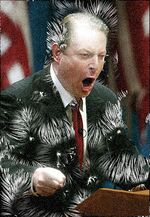 “To this I will attest, she must have fallen out of the ugly tree and hit every branch on the way down.”

“She is really not so ugly after all, provided, of course, that one shuts one's eyes, and does not look at her”

~ Noel Coward on Yo' Mama

A carnivorous member of the conifer family, the ugly tree is hardy enough to be found in some of the world's harshest climates. It has gathered a great deal of renown for it's mystical ability to alter the appearance of those who touch it.

Ugly trees have a number of distinct characteristics which allow them to be easily differentiated from other trees.

Ugly trees are often most easily identified by their root structure and typical underbrush. The ugly tree's roots are often found very close to the ground surface in order to collect as much water as possible during rainfall. These roots may even come out of the ground, creating a tripping hazard (one of the many hazards when dealing with ugly trees). The underbrush around an ugly tree is also an excellent indicator of this tree species. The ground around the ugly tree is usually covered with a thin layer of ugly corpses and piles of 37 day old sap which have fallen from the heights of the ugly tree.

The bark of ugly trees is thick and squamous. This bark is specialized to hold a great deal of moisture which is required for survival in harsh desert climates. As a result, moss is typically strongly attracted to the ugly tree and will cover most of its surface, as well as mushrooms in some cases.

Oh, somebody hug him, already!

Also, these branches (both kinds) are cut off and used to hit your mom. After their separation from the tree, they become known as ugly sticks.

The higher branches that are covered with foliage are known as canopy branches. Like most conifers, the primary foliage of the ugly tree is in the form of needles. These needles contain chlorophyll which converts the sun's rays into energy. This chlorophyll can also be used by the ugly tree to subdue, kill and rape its victims.

The canopy branches are also covered with small pores which have the ability to suck the beauty out of any person that comes in contact with them. As a result, falling from an ugly tree and hitting every branch on the way down can be very hazardous to one's popularity and social standing.

The ugly tree also possesses a large flower at its apex. This flower is sought by many adventurers as it is supposedly where it stores all of the beauty it steals from falling people. Attempting to obtain this flower, however, is a very dangerous proposition. Even if the adventurer manages to survive past the reaching branches and does not directly contact the canopy branches with his skin, the upper sections of the ugly tree's bark is covered with a slippery sap which (though delicious) makes the tree nearly unclimbable. Anyways, even if you reached the center and got the flower, you would still need to climb down again through the sap and risk falling and becoming an Uglo-American again.

Nobody truly knows the exact origins of the ugly tree. It's almost magical qualities have often made it the object of myths and folklore. Some even believe it to be the legendary tree of Nordic renown, Yggdrasill. Obviously, however, this is completely wrong, and those people are stupid. Scientists believe that the tree evolved from a prehistoric conifer. This primordial ancestor of the ugly tree is referred to as the fugly tree. It is said to have had than double the effects of the modern plant. The origins of this tree however, are beyond the grasp of even the most brilliant scientists. Steven Hawkings himself grappled with this strange tree and said that asking what came before the tree is like asking what is "two miles north of the north pole"