“This here war is doggone tiny!”

~ John Wayne on The Tiny War

~ Robert McNamara on anything that resembles a small, yet to be expanded, war 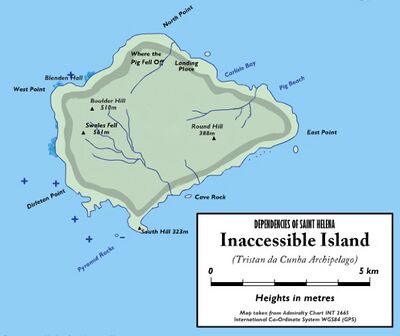 The Tiny war was the smallest war in history. It was fought on September 4, 1955, some time after brunch but before tea time, between the tiny nations of Luxembourg and Bahrain over Inaccessible Island and the pig and shack thereof. Due to the logistical and tactical challenges posed by the island's small size and inaccessibility, it took several years for each side to plan the war (which was declared in 1950), while the actual fighting lasted just over an hour.

Causes of the War[edit]

The root cause of the war was arguably the pig. While Luxembourg claimed to be the pig's original owner, Bahrain claimed that all pigs were originally given to it by God. After World War II, America gave the pig to Bahrain in compensation for atrocities committed on Bahraini citizens during the war. However, Luxembourg would not give up its porker willingly, and so the United States occupied Inaccessible Island from 1947 to 1950. The beginning of overt hostility by the belligerents began in 1951, after the US withdrawal.

Bahrain's forces were to approach from the East by sea. A small detachment of elite troops would land at the East point and scale the perilous cliffs onto the island proper, while the ships would provide support by way of ordnance and anti-aircraft capabilities. They would then clear the area and establish a complex and experimental system of pulleys and levers to lift the 5th Bahraini armoured division up the sheer cliff face, which could then systematically make its way across the island (the armoured division, that is, not the cliff face), easily neutralizing Luxembourg resistance.

Luxembourg High Command had planned to attack by submarine, thus taking the Bahraini forces by surprise, but after the first two years of deliberation, scrapped that plan and decided to come by air, dropping paratroopers on the island to defeat the Bahrainis by simply saturating the island with soldiers. They would then regroup Where the Pig Fell Off, and commence a systematic sweep of the island to ensure that no pockets of Bahraini resistance remained.

Half of the Bahraini fleet was diverted by a passing pod of dolphins and didn't reach the island until eight days later. This left the Bahraini force severely crippled and unable to carry out their plans properly. Their fallback plan, improvised on the spot, included eight yards of purple cloth, a ball of string, twenty six rutting caribou and pamphlets describing a disenfranchised proletariat. These items were left on the island, and the Bahrainis immediately left to watch from a safe distance.

The record of the subsequent events was lost in the archive fire of 1992, but it appears from historical records and that book by Stephen Ambrose that neither side managed a decisive victory. Historians agree that both sides had no other choice but to concede control of the island to its native inhabitant, the pig, who lived in the shack for many years afterwards and died of natural causes in 1973. The pig was then partly cremated, and proved to be quite tasty.