The North American War was a large scale conflict that broke out between the USA and Canada over which country was the better one to live in. While at first an American victory seemed likely, a series of blunders led to the tide turning and Canada taking an upper hand in the war, followed by a complete collapse of the United States military and the surrender of almost all of the USAs land to Canada (and a small amount to Nigeria, for some reason). It was also cause by Mc Donalds when they decided it would be funny to Blow up KFC. 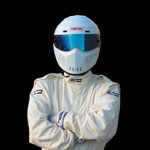 George Bush in one of his 'Freedom Hats'

Build up to the War[edit]

George Bush had won the 2008 US Election on a promise of "Carrying on doing the same shit as before". He put his name forward for the election, despite there being a limit of only 2 terms for US Presidents by changing his name to Bilbo Baggins, so therefore he argued was a "different man" (He changed his name back following his victory). He also pointed out during his election campaign that while he was usually sane, he would occasionaly have short bouts of insanity where he would "order some pretty fucked up things to be done", something which the American population concluded would be fun. It was with this mandate that on the 5th November 2008, he ordered the invasion of Canada.

A US Air Force Fighter Plane

Americans love their bombs don't they

The first action of the war was the ordering of London, Ontario to be bombed, because they had stolen the name of 'London' from the UK. However, because of errors on all US Army & Air Force maps, Detroit was acually the city that was bombed. This fact would not be revealed to the American Public until after the war however, because of the passing of the 'Fair & Balanced News Act" Law in 2007, which made it illegal for any person or organization to report news, unless the news organization was called "Fox News". Fox News reported that the bombing was a complete success (which it was, not a single building was left standing in Detroit).

With Detroit in ruins, Bush decided to bomb another city, this time much further north than the initial target of London, since if the maps were all wrong, attacking a target that far north would mean the bombs would at least land somewhere in Canada. He therefore decided to attack the North Pole, but due to an error in communication instead of ordering the Air Force to bomb the North Pole, the order given was for the Army to invade the North Pole. Nothing of the US Army was ever seen again. Theories as to what happened to the US Army on their march to the Arctic range from "They thought 'fuck this' and all went to live in Vancouver" to "They actually got to the North Pole, but all commited suicide when they discovered Santa Claus didn't exist".

Despite these two setbacks, Bush remained undeterred. He gave a speech in the '5 sided building thingy' in front of the Generals that were still left that "The loss of our entire Land Forces means nothing. You can always send the ships to conquer Canada. Canada has lots of water in it, right?". Fortunately, a group of NRA members had decided to do a bit of invading of their own, and did manage to take over Montreal, boosted by the possibility of actually finding some real French people to kill.

The Head of the Canadian Army

Canadas initial respone to the attack was first to laugh it off as "George going off on one", but as it became clear that they acually were trying to invade, asked other contries of help. There were few offers however, with only the UK, France, Germany, Spain, Italy, The Netherlands, Belgium, Japan, China, Russia, Mexico, Argentina, Australia, New Zealand, South Africa, Nigeria, Egypt, Iran, India, Pakistan, Chile, Togo, Fiji, Peru, Ireland, Sri Lanka, Poland, Bulgaria, Belize, Indonesia, Saudi Arabia, Norway, Switzerland, Morroco and the USA offering help. The offer from the USA was made after Bush thought it would be a good way of getting spies (Like the ones from the Civilizaion Games) to "Investigate Cities", thinking that the Canadians had not caught on to who was invading them and would assume it was Mexico.

With this small force of 500,000,000 soldiers at their disposal, Canada decided their best bet of victory would be to cut off Washington DC from their supply of Heroin and Cocaine, leaving the entire political system of Congress unable to function. Canadian Forces (and all the other countries) crossed the border on the 15th November, and began their march to Washington. The American population who saw the army ignored them, and did not tell anyone since nothing could happen in America without the glorious leaders approval, and so thought it must have been some cunning plan.

The head of the Canadian Force decided 2 days into the march that since nothing was happening to them, to ditch the original plan of cutting off Washington and go on what has since been referred to as the "Massive Rampage of Unimaginable Scale". This lead to the capture of almost all USA territory, except New Mexico, since all the Canadian Forces were Simpsons fans, and thought it would be funny to do a Homer Simpson impersonation and pretend they didn't realize "New" Mexico was actually a US State.

The War Comes To An End[edit] 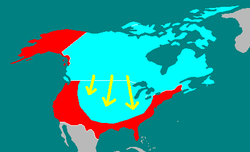 Canadian Controlled Teritory after the first couple of days of the invasion.

The last action of the war was a desperate attack by US Forces (Made up of nothing more than some Police Cars) on Canadian Forces in Los Angeles. When this failed, the US Congress decided they had to surrender. Bush disagreed, and fired all the Senators, saying "This is my house bitches". The Senators therefore organized a plan to kill Bush. Dick Chenney was chosen for this task, and decided the best method would be to shoot him in the face (due to his obvious experience in this matter). The plan was carried out on the 24th November, and with Bush dead, Bill O'Reiley became the next president, and organized a cease-fire, sigining the peace treaty in a submarine (he aparently had a phobia of signing things in the open or in buildings).

Under the peace treaty, Nigeria was given Vermont for some reason, with all other US States except New Mexico and Alaska were given to Canada. Fox News eventually reported what had actually happend, from their new headquarters in the American capital of Wasilla (You know, that town Sarah Palin was mayor of, remember her?). So ends the biggest fuck up in world history since the making of "Manos, The Hands Of Fate".

By a remarkable coincidence, the war happened to exactly follow the events of the 1968 Christopher Lee Film "Dr Strangelove, Or How I Learned to Start Worrying And Hate The Motherfucking Snakes on a Plane". Christopher Lee could not be reached for comment, as just after he finished filming, he died by snakebite under mysterious circumstances.