The Holy Teutonic Crusaders of Yumyum

“This is the greatest religion ever! Arrr!”

~ Oscar Wilde on the Holy Teutonic Crusaders of Yumyum

The Order of the Holy Teutonic Crusaders of Yumyum was founded by His Holiness Brother PenneRigate in Paderborn, a city located in Germany. He and his blessed brothers - believing the one true history of origin and future - are convinced of the one right path, the conversion of the masses is the aim. And noodles.

The belief is based on Flying Spaghetti Monsterism.

The main influence for Brother PenneRigate was the seer (and designated) Brother PressoRistretto. He, with all his sageness, revealed the truth to him. Another believer, Brother PenneAldente, showed him time has come to spread the le... ehm... word, word! So the order was founded on August, 23th in 2005, nearly one month before the Holy Pirate Talking Day.

The holy order agrees to most of the facts of saucy genesis of FSM. But read it yourselves:

At first there was nothing, but His Noodlyness. But He, in His sageness, created three mountains. As there was no land before these were islands. He baptised them (with beer) Scabb Island, Phatt Island and Booty Island.

Then he created the trees and the Midgit, a guy called Guybrush. The Flying Spaghetti Monster told him to create small humans, having never even created a human before. Guybrush was the first 'chosen one' known to mankind, cause he created mankind.

The following three days, the wise One made everything else, including the famous hot grog. Due to a heavy overdose of grog, Guybrush lost his memory and can't remember how important he was for all we're believing in nowadays. But Guybrush was the first pirate and this joyful event is celebrated every Thursday.

It is right that our omniscient and exquisite Father rested the last three days of the week we use to know - and so do we!

Not true is the pretended fact, that He created cave man with the intention of making a race - it have been ninjas.

Always remember that we believe in a heaven full of beer and strippers, see more here.

Talk Like a Pirate Day, September 19th (history) is the most blessed of all days, equivalent to Christians' "Christmas". This is the day the Flying Spaghetti Monster blesses all the people who talk like pirates, be they followers of the FSM or not. Obviously, to not talk like a pirate incurs horrific penalties, some of the worst of which involve haddock, but they are too gory for your eyes.

Not every follower - obviously chosen by His Noodlyness - is blessed with the great gift of reading the noodles.

It's only one member, the seer, who has the ability. Rumors are around, that the holy noodles are more readable during bad weather. This is the way to excuse. The seer can't interpret the noodles during good weather - the holy Noodlyness wants His followers to enjoy life under the blue sky.

Day of junk and scrap[edit]

This is Brother Stan. He is our first honorary member

This day is given to pay homage to the famous fruitless dealer / tricker Stan (scroll down for his beautiful relaxing picture) The crusaders appreciate his appearance every first day of the month. You don't have to go to work, just look out for some rowing boats or coffins to buy!

But be warned, he is reported to be - under some hardly probable circumstances - talking a lot. To be forearmed for this case, you should have some nails and a hammer with you - you could need them...

Our Brother Günther discovered the gift of drinking beer to save the rain forest. And - surprise! - it works! Try it for yourself, one crate of beer saves up to one meter² of rain forest. We do this to save the friends of Thorben-Hendrik, his famous parrot. The 'Drinking-For-Nature-Day' is every day you want it to.. That's how you like official holidays, arrrr!

Every noodle is a good noodle. There's no racial segregation for the Teutonic Crusaders, they love Rigates, Spaghettis, they love them self-made or deep-frozen.

Preparation is definitely a duty! The Crusaders know what's waiting in heaven: Beer and Strippers. To be forearmed for the timeless, never ending experience in heaven, the masses should practice as hard as they can. The expectations are high for the followers, but that's the price of faith.

Spread the word! It has infinite value for a growing community. The word has to be spread transnationally!

The Order has no hierarchies in general. Everyone is equal to his Noodlyness. Only two cardinals are elected on August, the 24th. The results will be posted on Tuesday evening.

In order of joining:

The first three holy crusaders joined coevally. So a decision, who is first, second or third is hard to make.

The seer of the order. A designated cardinal may be.

As mentioned before, he was the one showing the urgency of founding the order to the younger Brother PenneRigate.

He joined as the 4th member to the holy order.

Member number 5 and spreading the word in Sennelager.

We welcome our first sister in all her glory. She is proud to proclaim the saucy word around Munich.

As far as we know our youngest member. But that doesn't mean he can't eat as much as any other here.

Judging by his appearance, he has a big capacity for wisdom. But it's not - it's just for noodles, the delicious "Eliche Tricolore".

Member No. 9 and female No. 2 is welcome, too. The question for male strippers and their rate in heaven towards the female will be discussed in our newsletter.

To complete the first ten users and to spread the word in Bielefeld, Brother AgnolottiAlSerpente converted to share his belief. Take our wise Brother as a model - may you all be forever touched by His Noodly Appendage.

Following the instructions of our adorable Noodlyness, he convinces the habitants of wewer and the broader environs.

Our silent brother converted to complete the dirty dozen. May His noodly Appeareance bless him with speech.

His Noodlyness sent out Brother Casarecce to spread the word from the fair city of Vienna to the shores of the Lake of Constance. Our saucy creator placed a large burden on him, but we all know he is dignified to fulfil this life task.

27th August was the date, brother Gnocchi joined. And he promised to be free of anything not being noodles for the next 27 years. This contract lengthens for another 27 years if not cancelled six months before.

Our first member joining in September was Sister Nockerln. We take her great body as a proof of the existence of His Noodlieness!

He took it upon himself to join the order after a quick conversion to its ways, the afternoon of 12/14/2005. ARRRGH!!! The order is proud of his fighting spirit and hopes that he raises the moral of everyone of us to undreamt heights. 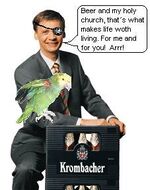 This is Brother Günther. He is our second honorary member

Our only wise brother Günther spreads the word - under the pretext of moderating a famous TV show - all around Germany and its neighbouring countries. As you can see, he is quite religious and he loves the holy beer!

He is definitely blessed by His Noodlyness and he is accountable for getting merry for the rain forest. But see more here.

...is famous for 80s hair, and making bombs using only duct tape, paper clips, and kittens. But do never forget to mention he believes in His Noodlieness!

Our blessed brother Angus is the minister of defense. He, in his wisdom, uses no handguns due to an accident occurring in his childhood. (Not his birth, stupid!)

But he's the one, with his unimaginable sense for natural and physical science, who is able to defend us. He fights against the evil influence of Brussels sprouts; the official hell of Flying Spaghetti Monsterism... with just a paper clip and a tape.

Every Christmas Eve, Santa Claus, as many children refer to him, will make his rounds. He visits every house in the world, leaving presents for good children, and coal for bad children. The presents he gives actually contain bombs. These bombs will simultaneously detonate in 5 seconds. Run!

Brother Happy is actually gay and likes to eat your mum's cock. Naturally, this leads to mass confusion, because this is actually Your job. Brother Happy kills kitten huffers and loves you.

The first artefact known to mankind is the Holy 5MinutenTerrine. It has spread out unnoticeably and can now be seen everywhere - even supermarkets were unable to escape. No fear! It's a great helper in times of need.

The second artefact is the holy pot. Pot for the noodles for sure! It was found in Brother PenneRigate's kitchen as a holy sign and proof of the existence of his Noodlyness. Everyone finding a pot in their kitchen can be glad - they have been chosen to do the greatest thing on earth. Cooking.

The third artefact is the holy water. Which is beer, in fact. For the holy teutonic crusaders of yumyum, a little slurfing a noodle doesn't go the way for conversion. You need beer for this, too.

This powerful artefact was discovered by Brother PressoRistretto. It has the incontestable ability to substain everybody touching it to beautiful circuiting movements. Scientifically inexplicable it has power to let us taste the holy sauces. May his noodlyness bless us and the holy wooden spoon!

Peter lost his belief in His Noodlyness, so all his memories were deleted as punishment. Unfortunately, Peter was our server -> a-g-a-i-n a few eMail addresses are gone.

The last polls result: There will be no 5th holy artifact. But one question remains: Should Brother Gnocchi be our inquisitor ?

Many other facts of the order will be added soon. The holy teutonic crusaders are busy with the artifacts and converting..and sometimes work, too.

Brother Mirácoli mentioned, that the membership is totally free, you have lifetime-free-access to all features of the belief. (even no credit card needed)

You don't think Barilla is just a boring city in Italy? You know Bertolli and Buitoni? You know these are rather places of pilgrimage?

Back to the Flying Spaghetti Monster page