Conformable to the Edition of 1612, commonly known as the UNAUTHORIZED or QUEEN JAMES VERSION.

Please note that all contents are translated from jooish and the original meanings may vary slightly. 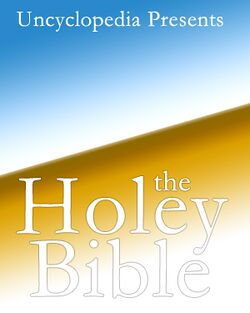 And there was light, because God said so, and not because of some sort of hydrogren to helium machine.

And God saw the light, that it was bitchin': and God divided the light from the darkness. And God called the light Dave, and the darkness he called Nap time. And the evening and the morning were the first day.

And God called the fermentation Heaven, because he's God and can call it whatever he wants. No, I just said the Earth came first, weren't you paying attention? And the evening and the morning there the second day. And God said, Let the waters under the heaven be gathered together unto one place, and let the dry land appear: and it was so. And God called the dry land Earth: and the gathering together of the waters called he Seas: and big G saw that it was bitchin'.

And God said, Let the earth bring forth grass, the herb yielding seed, and the fruit tree yielding fruit, after his kind, whose seed is in itself, upon the earth: and it was so so.

And the evening and the morning were the third day.

And God made two great lights; the greater light to rule the day, and the lesser light to rule the night; also, he made some stars with the leftover construction paper. And God set them in the fermentation of the heavens to give light upon the earth, and to rule over the day and over the night, and to divide the light from the darkness, yet again: and God saw that it was rly bitchin'.

And the evening and the morning were the fourth day.

And the evening and the morning were the fifth day.

And God said, Let us make man in our image, after our likeness: and let them have domination over the fish in the sea, and over the fowl in the air, and over the cattle, and over all the earth, and over every creeping thing upon the earth; especially the vegetarians.

And God blessed them, and God said unto them, Be fruitful, and multiply, and replenish the earth, and subdue it: and have dominion over pretty much everything that moves; just no apples. And God said, Behold, I have given you every herb bearing seed, which is upon the face of all the earth, except apples, and every tree in the which is the fruit of a tree yielding seed; to you it shall be for meat.

And God saw everything that he had made, and behold, it was really bitchin'. And the evening and the morning were the sixth day.

And God blessed the seventh day, and sanctified it: because that in it he had gotten bored and lazy from all his work which he created and made.

These are the generations of the heavens and of the earth when they were created, in the day that the Lord God made the earth and the heavens.

But there went up a mist from the earth, and watered the whole face of the ground. This was the first rain, and it was probably the wettest, as all first things are the best.

And the Lord God formed man of the dust of the ground, and breathed into his nostrils the breath of life; and man became a mud golem.

And the Lord God planted a garden eastward in Eden; and there he put the apeman he had formed.

And out of the ground made the Lord God to grow every tree that is pleasant to the sight, and good for food; the tree of life also in the midst of the garden, and the tree of knowledge.

And a river went out of Eden to water the gardens; and from thence it was parted, and became into four heads.

The name of the first is Pison: that is it which compasseth the whole land of Havilah, where there is gold;

And the gold of that land is bitchin': there is bdellium and the onyx stone.

And the name of the second river is Gihon: the same is it that compasseth the whole land of starvin' marvin.

And the name of the third river is Hiddekel, the most jooish named of all: that is it which goeth toward the east of Assyria. And the fourth river is Euphrates.

And the Lord God took the man, and put him into the garden of Eden to dress it and keep it.

And the Lord God commanded the man, saying, Of every tree of the garden thou mayest freely eat:

But of the tree of knowledge, thou shalt not eat of it: for in the day thou eastest thereof thou shalt surely die. And the Lord God said, knowledge is forbidden, for questioning of faith is the road to damnation.

And out of the ground the Lord God formed every beast of the field, and every fowl of the air; and brought them unto Adam to see what he would call them: and whatsoever Adam called every living creature, that was the name it was called by every man thereafter.

And Adam gave names to all cattle, and to the fowl of the air, and to every beast of the field; but for Adam, there was not a helper there for him, for he was not a furry.

And the Lord God slipped ruffies in to the water whence Adam drank; and Adam slept: and he took one of his ribs, and closed up the flesh instead thereof;

And the rib, which the Lord God had taken from the man, made he a woman, and brought her unto the man.

And Adam said, This is what God made of my bone, it is flesh of my flesh: she shall be called woman, because she was taken out of Man, and Man's bone will be put back in her.

And the Chicken did come before the egg-bearer.

Therefore shall a man leave his father and his mother, and shall cleave unto his wife: and they shall get it on.

And they were both nekkid, the man and his wife, and were nudists.

Now the serpent was more tricksy than any beast of the field which the Lord God had made. And he said unto the woman, Yeah, hath God said, Ye shall not eat of every tree of the garden?

And the woman said unto the serpent, We may eat of the fruit of the trees of the garden:

But of the fruit of the tree which is in the midst of the garden, God hath said, Ye shall not eat of it, neither shall ye touch it, lest ye die.

And the serpent said unto the woman, Ye shall not surely die:

For God doth know that in the day ye eat thereof, then your good eyes shall be opened, and ye shall be as gods, knowing good and evil.

And when the woman saw that the tree was edible (no, not the tree itself, moron, the fruit), and that it was pleasant to the eyes, and a tree to be desired to make one wise, she took of the fruit thereof, and did eat, and also gave unto her husband with her; and he did eat.

They soon had diarrhea, for they have not washed the fruits. They then got dehydrated and ate a bunch more.