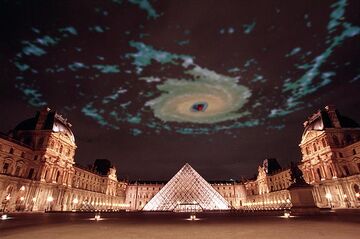 The Shadow Over the Louvre: One of the Outer Gods surveys the setting of The H P Lovecraft Code

A conspiracy theory revolving around the idea that H. P. Lovecraft's vision's of a world ruled by unearthly, ancient beings known as the Great Old Ones is in fact true. Not only this, but their worshippers persist as a highly organised and powerful cult including many notable historical figures, including Leonardo da Vinci. The theory is described in a novel, abridged below. As you read, do not think too hard on it because the only thing to save your sanity once you are aware of the facts is "the inability of the human mind to correlate all its contents".

The Horror in the Louvre[edit]

Professor Rhodes was never overjoyed to be awoken at 2 o'clock in the morning, but the image with which the gendarme greeted him made his stomach turn. The unutterable blasphemies performed on the body in the photograph were nearly enough to make him leap, quivering back into bed, only to leave again for the security of a mental asylum. Then he remembered the dreadful consequences of returning to that prison of insanity known as sleep. For that was where he was most vulnerable. He remebered with horror the dreams he had the night before-- O God! how could they be mere fantasy? But how, how could such monstrosities be true?

"What did this to him?" he asked the gendarme when he had finally collected himself and resolved that he must do his duty to help the police not to discover the truth; it was for their own good, and the good of all mankind. Not seeming to notice the professor's unusual choice of words and their horrifying implication, the man at the door answered with words which shook Rhodes' very soul, "He did this to himself." No. No. Surely not. Surely the man Professor Rhodes had revered for years now was not on their side? The full enormity of what had been said reverberated around Rhodes' brain, seeming to echo those fateful words in their inhuman language: Ia! Cthulhu fhtagn! He dressed hastily and was taken in the police car to the scene of the crime: the Louvre.

Inside he was greeted by the inspector running the investigation: Inspector Legros. Interesting, Rhodes thought. They've brought in a provincial for the investigation. But then, Legros was clearly the man for the job, given his expertise handling the case of cultists operating in Orléans. "Professor, how good to see you again." The two had met before at an international convention of archaeologists, when Rhodes had first heard about the diabolical cult of Cthulhu. Was it to be that the two men would forever be bound up together with these atrocities? Rhodes hoped desperately that this would not be so. "Come along, professor. I fear we have a long night ahead of us." "That's not all I fear," muttered Rhodes, forcing himself not to turn and flee from this cursed house of death. Legros led him on through seemingly endless passages past blocks of cyclopean masonry, the facade of a temple which seemed all wrong. Most terrible of all, Rhodes thought he saw amongst the ancient statues an idol depicting a mad and faceless deity. Now they were passing thought the Roman sculptures, weaving between Apollos, Heras and Bacchuses.

The professor's heart stopped cold when he saw the true situation of the body. He had seen from the photograph that the dead man had been clutching at the foot of a statue, but now Professor Rhodes understood the true significance of this detail: it was a figure of the goddess Cybele, the Magna Mater, whose cult was notorious for the savagery of their frenzied orgies. She was a goddess whose worship bore a terrible similarity to what Legros had discovered in that abominable Orléans swamp. However, this startling fact was a mere side-show to the absolute, unmentionable horror of the corpse. "Do you recognise the victim, professor?" asked the policeman. "Yes, I do," Rhodes answered, deeply shaken. "He is, was Dr de la Peur, an anthropologist and historian of some note. I never met him myself but I have admired his work for..." at this point he broke off, stunned by the condition of the body. Any single part of which would be appalling, but combined, and in the light of Rhodes' own knowledge, they were maddeningly hideous. The body was spread-eagled on the floor; in his side gaped the bullet wound which had killed him. Blood from this had been used to mark the two things which struck Rhodes as most abhorrent: a five-pointed star on de la Peur's chest and apparently meaningless words on the floor beside him. The fateful sounds "Ph'nglui mglw'nafh Cthulhu R'lyeh wgah'nagl fhtagn": words which Rhodes and Legros both knew and feared. Fortunately, Rhodes thought, Legros's assistant, a Sgt. Phélippe, did not seem to have been instructed in the nature of the cult. "Shall I call a cryptologist?" he asked, pointing to the words. "It seems to be written in some kind of cypher."

"No, no. That won't be necessary", was the inspector's mournful reply. "So, professor, what is that symbol on his chest?"

"It's a satanic sign, sir," the sergeant interrupted. "Devil-worshippers, sir."

"Well, you could say that," gasped Rhodes, cold, sickening fear clutching at his heart. "It's an elder sign, a symbol associated with the Great Old Ones. They are as ancient as that blasphemous cult itself, though some think that they were intended to ward off the monsters." The sergeant's look of bemusement as he glanced between the professor and Legros dispelled any doubts that he certainly did not know anything of Cthulhu and his accursed kind. "You don't know what I mean do you, sergeant?" Just as Phélippe was shaking his head, Legros glared at Rhodes: Of course, it was best that he understood as little as possible. "Could we go somewhere else, please?" asked Rhodes, aware again of the abomination at his feet. And so the three of them moved on to look at another exhibit entirely, the museum's most famous: the Mona Lisa.

Noticing Rhodes' look of complete bafflement, the inspector explained, "Look at the background of that. Look closely. What do you see?" Rhodes peered for a moment then lept back in shock. What he had believed all his life to be nothing more than rocky crags in an imaginary rural view, he now saw were enormous blocks of cyclopean masonry. And what was worse, he had seen them before. In that dream last night he had wandered among these ruins which defied all laws of human geometry and heard the earth echoing in his mind the unutterable, blasphemous words "Ia! Cthulhu fhtagn!" 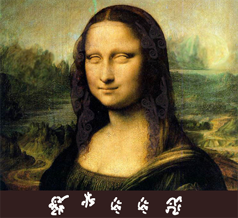 The Mona Lisa (N. B. This is the genuine, uncensored version. All others have been modified for human viewing)

"Now look into her eyes, those famous eyes which have puzzled experts and tourists for centuries." The professor, wary of what unknown horrors he might find, gazed with a sense of impending doom. At length, he screamed. The sound echoed around the darkened halls of the palace. "My God. My God. How terrible. Surely he wasn't? Surely she isn't?" What a secret she held indeed. Locked in those eyes was a terror older than the aeons. And she smiled at it? Surely she had reached the depths of insanity; she had looked into the mind of great Cthulhu himself. "Da Vinci? Surely not? He couldn't have been."

"Remember, professor, the artistic are the most vulnerable." Just then, a gendarme burst into the room, "Sir, we've found a guard who thinks he saw the intruder. He says he saw a tall, thin young man whose eyes sparkled with humour; the suspect was near the Roman gallery." It was then that the significance of this struck Rhodes: The merry one. La Gioconda.

Legros looked relieved that there may be a human explanation for the inhuman blasphemies they had uncovered that night. He told the gendarme to bring the guard along, but he just replied, "I'm afraid he won't be much use as a witness, sir. He's gone mad."

The theory proposed in the controversial best seller has been widely rejected by both artistic and religious experts. These insist that da Vinci had no affiliation whatsoever with any blasphemous cult, that Cthulhu, the Great Old Ones and the Other Gods were nothing more than a work of fiction, and that the world is not in the grip of malignant and blasphemous super-human powers. Those supporting the conspiracy theory are few and many have been disregarded on the grounds that they are inmates in mental institutions around the world.

The author is notoriously reclusive and only grants occasional interviews. In the latest of these he defended by summoning an army of cats, some seeming to leap down from the moon, to devour the impertinent interviewer.

There have been numerous calls from religious pressure groups for the novel to be banned and its author and publisher to be locked away. This latter is somewhat hindered by the recent mysterious disappearence of all those associated with the production of the book.

Due to the popularity of the book, a film was recently mooted in Holliwood. Expected to be a sell-out success at the box office, critics and commentators were amazed when, two weeks into production, the film was put on hold indefinitely. Many fans have criticised the producer for yielding to religious pressure; however, a small band of dedicated conspiracy theorists point instead to a sparkling-eyed stranger seen lurking near the studio...