From Uncyclopedia, the content-free encyclopedia
Jump to navigation Jump to search
The Animals of Farting Wood (TV series)
left 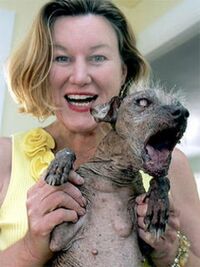 Following his adventures, Badger suffered at the hands of a bariturate addiction.

For those without comedic tastes, the so-called experts at Wikipedia have an article about The Animals of Farting Wood (TV series).

The Animals of Farting Wood is an animated series created by the European Broadcasting Union between 1992 and 1995 and based on the series of books written by Colin Dann. It was produced as a spoof of the timeless classic 'Animals of the Farthing Wood'. The original characters were all portrayed in the comedy remake - but in twisted, satirical forms outraging many hardcore fans for several minutes.

Though enjoyed by many middle-aged men, 'The Animals of Farting Wood' only ran for one series. The programme was then axed as it was seen as inappropriate. The first wave of complaint came from fans of the original cartoon.

"How such a perverted and shameless send-up of such a much-loved children's TV programme can be allowed to air is beyond me. I think this supposed 'comedy show' undermines all of the important moral issues and values covered by its predecessor." said one vocal spokesperson who fought against the spoof.

Though the complaints were strong and frequent the BBC did not consider cancelling the show until it was faced with a different sort of complaint. These came from the several members of the public following the second episode in which Fox was introduced. Many people felt the inclusion of an ex-army combat fox in a comedy was undignified, and showed lack of respect for the serious plight of actual combat foxes.

At that time, of course, many British foxes suffered from traumatic stress syndrome. Several had obtained automatic weapons and opened fire, killing some hounds outright and wound many more.

"Combat foxes suffer incredible and hideous injuries fighting alongside British troops," said Mary Humbphry-Docks of the Rights for Foxes League. "Three thousand foxes are killed every year, and some of these may be leaving a vixen and cubs back at home. I have been fighting for an end to all use of foxes in warfare, and feel that the portrayal of Fox in 'the Animals of Farting Wood' emasculates my serious arguments. It gives the British and Welsh public the wrong views on foxes of war."