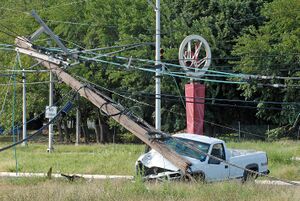 Telephone poles are long, vertical pieces of wood, erected on roadsides by the government to teach bad drivers a lesson. They were first conceptualized in 1911 by British inventor Leonard Telephonepole[1], during his stay in the United States. Telephonepole, apparently disgusted with American motorists for, as he put it, "driving on the wrong bloody side of the road," was seeking a more efficient means to cockslap inconsiderate drivers, which at the time had to be done either by telegraph, or by the rapidly disappearing Pony Express, both of which charged extremely high prices for their cockslapping services. Telephonepole wanted driving to be the great equalizer, so that not even the rich would be free to drive however they wanted without fear of being the victims of random acts of road-rage-inspired violence.

Telephonepole lobbied the American government for research money, and, after not getting any, spent several months performing sexual favors around New York City in exchange for the capital he needed. He spent most of his profits on treatment for gonorrhea, but had just enough left over for several dozen telephone poles around the city. He designed them to be mostly the same as the modern telephone pole: Made of wood, and about 8 inches thick by 30 feet tall. Telephonepole used these dimensions because he was "definitely not compensating for anything, because I definitely don't have anything to compensate for, and--wait, that didn't come out right..."[2] Leonard later had the idea to stretch charged wires between the poles, so he could "totally fry the shit outta some pigeons, too." And, just like that, the modern telephone pole was born.

Adoption by the government

Almost 2 years after Telephonepole's groundbreaking research in pole technology, the US government decided it would jump on the narrow, upright cylinder bandwagon, and began constructing telephone poles across the country. The US government was, as newly-elected President Taft stated, "definitely not compensating for anything, either." Instead, Taft and the Congress hoped to combat the rising numbers of dangerous car accidents by putting up threatening-looking things along the sides of roads. Unfortunately, funding was tight, and most areas could only afford to put up poles on one side of the road. While others might have been disappointed, Taft felt that it was "good enough," and declared that American roads were now the safest in the world.[3]

Telephone poles are, by design, uncomfortably close to the road. They work to give the driver a feeling of insecurity, and recreate the mental state of having a mean-looking old nun leaning over you and brandishing a ruler. The drivers that aren't paying attention will invariably crash, invariably into a strategically placed telephone pole. At this point, their car will now invariably sport a large, telephone-pole-shaped dent, and the driver will sport a large, telephone-pole-shaped gaping flesh-wound. Their dented car and broken body will teach them a lesson they won't soon forget.[4] 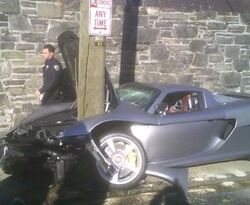 The driver of this car has been taught a lesson he won't soon forget.

This is not to say, however, that only bad drivers need worry about telephone poles. All it takes is a stiff gust of wind, and anyone's vehicle can be struck by the heavy wooden shaft of a falling pole, which is aerodynamically designed to seek out and destroy cars. As Leonard Telephonepole wrote when he first theorized about this functionality, it serves the invaluable purpose of "keeping 'em on their toes."

Due to an unfortunate coincidence of nomenclature, the large slabs of cylindrical lumber that line roadsides are often confused with telephone operators belonging to the Western Slavic ethnic group of Central Europe. In an attempt to combat this confusion, many telephone-operating citizens of Poland, as well as Polish users of long-distance verbal communication apparatus abroad, have been referring to telephone poles as "utility posts," a name which will undoubtedly catch on in no time at all and soon become the preferred terminology by everyone everywhere. Well, ok, not really.[5]

Anyway, in an attempt to combat this confusion that actually has a chance to work, Uncyclopedia will now provide a handy table to help the reader understand the difference between telephone poles and telephone Poles.

If the reader is still confused about this differentiation, don't be concerned; frankly, so are we.

Variations on the concept 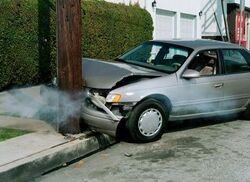 Thank you, telephone poles. Thank you.

The modern telephone pole used in many places bears an extremely close resemblance to the very first telephone poles put into practice. While some historians say that this is a reflection on the ingenuity of the original pole's design, these historians are mostly ignored, or only acknowledged for long enough to be told off for making such a ridiculous claim. Instead, most researchers with any sort of credibility know that the telephone pole's static design can actually be attributed to a general trend of increasingly unimaginative inventors, a sad consequence of the wildly popular 1920s fad called "inbreeding."

Still, architects with too much time on their hands will occasionally attempt to put their own spin on the classic telephone pole concept. One recently graduated engineer, bright and full of ideas, thought telephone poles might look prettier if instead of being all straight and tall they were made to be slightly curvy, or perhaps tied into a large bow. Despite getting several lumberjacks with wood-bending experience on board with his plan, this idea never went past the drawing board. Another recent college graduate, a city planner, realized that there would be significantly fewer accidents if telephone poles were only moved slightly farther away from the roadside. Upon introducing this idea, the man was laughed completely off the architectural scene for, as his colleagues put it, "totally missing the fucking point."[6] This example is perhaps most indicative of the true purpose of the telephone pole. It's not about what's "smart," or what's "practical," or what "makes any sense at all." It's about teaching bad drivers a lesson. Eat telephone pole, swervey!