Tales of an Emo 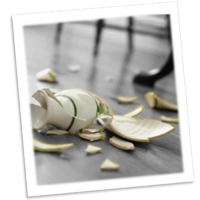 My cosmos is so much more relevant than yours.

Yesterday, the second-cutest girl in my bio class, Gretchen, finally realized I'm alive, which is, like, ironic. I've been staring at the back of her head for years, and fantasizing what it would be like to die with her. Or maybe it's only been a few weeks — I can't tell, sometimes weeks feel like years to me. I knew she was a beautiful, unique, tormented spirit, just like me, because her hair is the same shade of raven as mine, and she wears it combed across her head so that it all falls in a graceful arc just above her jaw. And there are tiny bulges under her shirt, which I'm pretty sure are nipple piercings. She passed me a note over the dead frog we were sharing, and for a heartbreakingly small moment, the darkness in my world melted. And then I opened the note and read it, and the darkness settled back like black rain falling on paper shards. It was a poem. It made me feel cold inside. Well, colder than usual. Even colder than the frog. I wanted to excuse myself from class, and then use my belt to hang myself from the second-floor staircase. 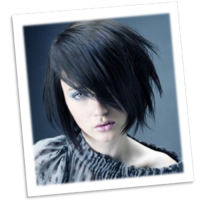 I think she meant to write it in trochaic heptameter, but she can't tell a trochee from a fucking iamb, and she can't even count as high as hepta-. It might have passed for free verse, if she hadn't made it rhyme. And the rhyme scheme was, like,

OMG, so utterly gauche. Its only saving virtue was the stylized sketch at the bottom — a man hanging from a tree with only one branch, and with a trunk shaped like a screaming face. But the whole thing was done on lined paper, with a ballpoint pen. MY GOD, WHY CAN'T ALL ARTISTS HAVE INTEGRITY? I looked at her, and she smiled, and her eyes were twin pools of emptiness. I wanted to feel pity for her, but instead, I vomited into a waste basket. We both had scalpels, for dissecting the frog, and I wanted to use mine on my carotid artery, right there in front of Mr. Eberhardt and the rest of the class. I could just imagine the looks on their faces when they saw the arterial spray. Would have been so boss.

She's dead to me now.

I am so utterly alone.

Nothing will ever happen.

Death is a wish my heart makes. 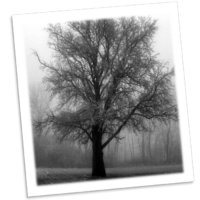 I was hanging with Yggdrasil today, after classes. His name's really Devin, but he calls himself Yggdrasil, after the Tree of Life from Norse mythology. It's so appropriate, you know, because Yggdrasil (the tree) is being devoured from within by an evil snake that will eventually kill it. We all have that snake inside us. It's called "sadness". Anyway, some assholes from the football team saw us standing together, and started making fun of our white makeup. We wear our makeup as a mockery of Death, but they called us "mimes". MIMES. Then they grabbed us, dragged us to a custodial closet, and took turns beating us with PVC pipes and shaving our heads with a set of electric shears. They made crippled jokes about black sheep — one of them said "baa!" over and over again. And then they tied us inside the marching band's big kettle drum, and rolled us down the hallway, all the way to the cafeteria, banging on the drum with their hands.

Ok, so perhaps they didn't actually roll us down a hallway in a kettle drum, or shave our heads. They also probably didn't call us "mimes", or "baa!" at us. But the way they eye-raped us as they walked past, with their cliché letterman jackets open to the wind like the wings of red dragons, told me that they would have done all those things, and worse. Drunken, pig-like murder stains their very souls. 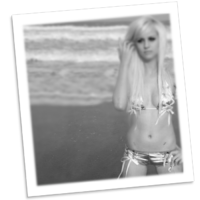 We went to the beach.

I met a thin girl in a bikini; she had scars on the insides of her thighs.

I went to the restroom and rubbed one out.

Today was the day when Yggdrasil and I finally lashed out against the Gesellschaft of high school life. The faux friendships and sad interactions are nothing but an absurd kabuki, a masquerade which passes before the eyes of an enervated world, a paradigm of non-existence which deserves to be ridiculed, and fiercely. So we stole some ladders from the maintenance shed, waited until nightfall, and then spray-painted "HIGH SCHOOL IS LAME" across every outer wall of the school. We intentionally used a haggard, tepid sentiment because the tepidity contrasts with our actual feelings, and contrast is the heart of irony. And there is no more relevant form of artistic expression than irony. Irony is German. Germany is tragic. Tragedy is life. And "life" is ironic. Full-circle, bitches.

It was so exhilarating that I think I could have gotten an erection, if only I had a penis. 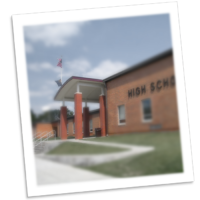 We weren't expelled. The entire student body wasn't carted away for interrogation by the fascist police apparatus. The custodial staff won't have to spend three days of their pointless lives laboring futilely with sandblasters to remove the palpable evidence of our wrath from the front of the school. As a matter of fact, no one even saw what we did, because we used a flat red color that perfectly matched the brick. We were disappointed at first, but then we realized that it was an accidental stroke of brilliance, a gift bestowed by the universe itself. What more perfect metaphor for life is there than a neutered statement of rage painted in 15-foot-high letters which no one can see?

We took all the grainy night-vision footage we shot of ourselves painting it, and then edited it down to 15 minutes, so that it would be just long enough to fit a composition by this German guy who makes industrial music with found objects. Then we posted it on YouTube. No one watched it. And that totally validated it.

My screams tear me internally.

Today, I found out that Yggdrasil is so inauthentic. He has a girlfriend. A girlfriend who's on the school pep squad. Calling her "vapid" wouldn't be insulting, it would be a crude over-statement of the truth. I can guarantee that she has achieved a perfect state of Zen, because her mind is blanker than a new dry-erase board. She has perfect blonde hair and perfect white teeth and a perfect tan, and when she bounces up and down on her toes (and she does that all the fucking time, like some sort of executive desk-ornament), you can see her perfect breasts bounce up and down, too. Her shirts are so tight that you can see Yggdrasil's heart beat. The poseur. I hope the two of them spend the rest of their perfect lives together. I'll bet they'll play The Killers' This Is Your Life at their wedding. And the best part? Her name is Devin.

They're both named Devin.

My world is empty.

I finished composing my 500-page tone poem on Friday. And then Devin — the one with breasts — found it, and stole it, and accidentally dropped it into the cafeteria grease trap. And then it was gone. GONE! There was a gaping emptiness in its place, like the emptiness that fills my soul. So now I'm sitting in front of a mirror, with a second BROKEN mirror in my lap, and I'm contemplating whether I should use the shards to cut ACROSS my wrists, or LENGTHWISE ALONG them. Crosswise is de rigeur, which I think is French for "so yesterday"? But I hear lengthwise is, like, totally effective, and I don't want to, like, ACTUALLY die. I don't think I do. Although...the thought fills me with such somber joy. All you pieces of shit being deprived of my presence...wandering around in a daze, muttering to yourselves "Oh, God! I never thought she'd actually do it...she talked about it all the time, but HOW COULD SHE ACTUALLY DO IT?? OH GOD! Now I want to kill myself...if there can be a world where she could not exist, I don't think I want to exist in that world, either." And your tears and lamentations would be sweet salve to my ethereal spirit...

...but, no, I think crosswise is the way for me. Today, at least. My mother (that bitch!) will find me here, sprawled across the cold, cold, oh-so-cold, cold-like-the-coldness-in-my-heart bathroom tiles. These tiles are a checkerboard of porcelain ivory and jet, like the alternating states of my mind. Ivory, for those days when life seems like a dull beigeness of tolerability, and jet, for those days when I descend into the pitiless depths of the Abyss. Yes, my mother shall find my semi-lifeless, semi-nude body sprawled across these cold, square semblances of my moods, like that painting of the French Revolutionary by that Greek guy...what was his name? Never mind. Yes, she shall see herself reflected in the pool of my lifeblood, and yes, yes, sweet horror, she will look into her reflection in my blood...and see the monster within herself. 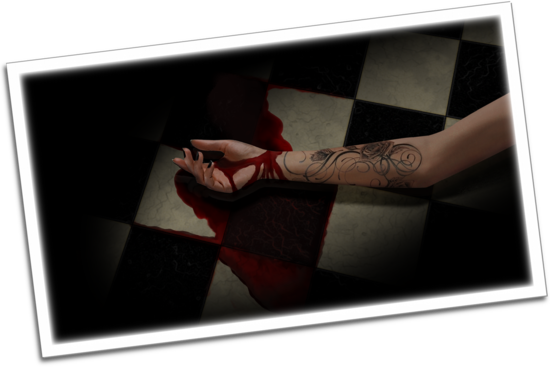 As I lay dying, it occurs to me that my death pose would make a tremendous cover for the Breaking Dawn sequel. If only I'd thought to scatter some rose petals...