Spilt Milk, is milk that has been spilt. Don't cry...

Spilt Milk was invented by Dr. Glockenspeil by accident in 1938. He sipped some milk and then he slipped and spilt the milk. By this he discovering milk can be in fact spilt. When asked about the founding of spilt milk he comemented, "This milk has indeed been spilt". Spilt Milk became a craze through out America soon after. Milk was being spilt everywhere. In fact it became so common it created a problem. Many went broke from spilling so much milk. So the government began a "Spilt Milk prohibition". Too many Americans had become addicted to milk that was spilt. Some moved to Canada to please their sick pleasures of milk spilling while others spilt milk under the cover of darkness. Then a hero came along named Thomas Milks. He rallied the masses to make the government allow milk to be spilt. Milks said "spilt milk is milk that was meant to be spilt". The Spilt Milk Revolution (not to be confused with Dance Dance Revolution) finally won out and Spilt Milk became legal again. Sadly the people who went to Canada for spilt milk freedom, became actual Canadians, eh?

Milk that was spilt had a profound effect on culture. Mant artists and poets paint/write about the beauty of spilt milk, milk spilling. Edgar Allen Poe made a spilt milk poem, which is his most famous poem of all time.

"Milk:
My Milk Has Been Spilt
Spilt Milk Is Now This Milk
I Did Not Know of Milk That Was Spilt
Milk Spilt, Spilt Milk
Milk.

Spilt Milk is usaully associated with the most sophisticated classes. Some have even made their homes to look like milk thats been spilt and have their own spilt milk spilling time. Hillbillies also enjoy spilt milk except they milk spill for the purpose of killing possums. Many dances influenced towards spilt milk have also been very popular in our culture. For example the Macarena. 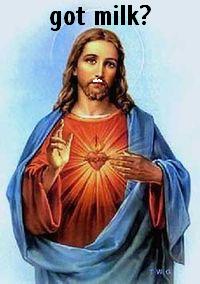 Jesus is a big fan of spilt milk (see his mustache)

Spilt Milk is also found in all religions. Jesus Christ is big on spilt milk. He has stated on several occasions that milk spilling "free's the spirit". Many religious followers have said to have seen visions of milk that has been spilt, and in turn they wake up to spilt milk by their bedside. Their even has been sightings of the Virgin Mary in milk (that has been spilt). Spilt Milk also has its own a religion, solely towards worshiping milk spills.

Spilling milk on other objects can be much more entertaining than just spilling milk on the floor. Even changing the spilling surface can make a difference. Spilling milk on bare feet can be incredibly arousing causing many to spill "milk" in their pants. Green with purple sparkle tile floors are obviously the best surface to spill milk on because of the satisfying splat and splashing noise occuring at the same time as the milk is spilt onto this surface. Experimenting with different colours of milk can also be an exiting experience but please do not try this if you are pregnant, have heart conditions or have just passed a tape worm. This can cause heart attacks, miscarriages and sudden soiling of pants.