“Man... Shane.. He used to babysit me and gave me my first glass of whiskey.”

For those without comedic tastes, the so-called experts at Wikipedia have an article about Shane MacGowan. 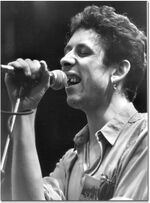 MacGowan before transforming into the mighty Holligan witch.

Shane Patrick Lysaght MacGowan (born 25 December 1957) is the former lead singer with The Pogues, and the current lead singer with his new band The Popes. Born in Dublin, sometime in a past century, MacGowan has always been a contraverisal figure. He is famous for drinking, having no teeth and having an altracation with supermarket supremo Feargal Quinn over the price of turnips in the Blanchardstown branch of Superquinn. However, in the subsequent trial MacGowan was cleared of assualting the permatanned Quinn with a root vegetable.

Some regard his crowning moment as being the invention of Christmas in 1987, with the composition of the song "Fairytale of New York". However others were more impressed when in 1989 he was appointed as Minister for Health in the Irish Government. When sober he proved to be a surprisingly effective politican, telling pretty much everyone to "fuck off". He resigned in March 2001 to concentrate on his latest album with The Popes, which features a collaboration with Dannii Minogue.

Shane MacGowan was also made King of the Universe after winning a drinking game with Oscar Wilde. (Whos perents were not-so-dear friends of Shane for many years.) It is a little known fact that the band Queen asked Mr. MacGowan what it was like holding the title. However, as Shane MacGowan's speech is only understood by A) People who have drunk twice the amount of alcohol necessary to kill you, B) A lisping Jamaican trying to speak Welsh Gaelic really fast, and C) Mark E. Smith, Queen eventually gave up and just wrote the song "Princes of the Universe" instead. 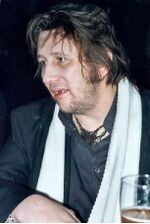 MacGowan got his sunday clothing and his best smile for the new photo!

Due to a horrifying and abusive childhood, Shane MacGowan (after being thrown out of school for being drunk and disorderly at the age of 7, and founding the city of Cork at the age of 12) fell in in with a gang of fellow delinquents called "The Nipple Erectors". They passed their time by nefariously sneaking up on unsuspecting middle class rebels and tweaking their nipples, recording the surprised squeeks for their later enjoyment. However, as luck would have it, a music executive walking down a street overhead their tapes, and signed them up on the spot.

MacGowan, going by the name "Shane O'Hooligan" due to him forgetting what his last name was, fronted the band, writing singles such as "King of the Bop" (The Bop being Shane's own nickname for the universe), and "The Happy Song", which was intended as an ironic piece about the state of the streets until he got distracted by the syllable "ba". However, due to one of the members, a dragon aptly named "Dragonella" (Although later changed her name to Shanne) burning down most of their venues, and the fact most of the band members forgot they existed, The Nipple Erectors eventually disbanded.

Shane eventually managed, somehow, to form another band, promising to mix old punk credentials and Irish folk music but in reality degenerating in MacGowan railing against whatever happened to be on his drunken mind at the time. With so many critics calling them "absolutely arse", Shane hit upon the idea of actually calling the band that, although eventually was made by music executives to translate the name into Irish Gaelic to avoid offending the three people he hadn't reached yet. And so, The Pogues were born.