For those without comedic tastes, the so-called experts at Wikipedia have an article very remotely related to Rufus Wainwright. 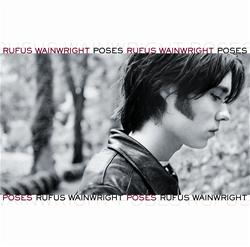 ~ Rufus Wainwright on French and Saunders

Rufus McGarrigle Wainwright (born July 22, 1973) is perhaps best known for being a wheel-making extraordinaire. In addition, he is a singer-songwriter, a man's man, a rebel prince, and a one man guy. He is also well known in the cooking circuit for combining cigarettes and chocolate milk into something edible, and for confusing the Irish.

While Wainwright deserves most of the credit for being a . the making of the wheel (not to be confused with its invention (see #59)), credit should also be given to Leonardo da Vinci's naked 4-armed, 4-legged monster for inspiring him in the first place. It seemed clear at the time that by nailing boards to every set of adjacent limbs (resulting in a red, drippy, and painful octagonal configuration), a "wheel", which had until that point been purely a theoretical object, would be formed, and the naked 4-armed, 4-legged monster would be allowed to move. This proved difficult to implement, however. The true story is much more complicated than the above description, but an accurate accounting of the making of the wheel would take a while. Legal woes involving the patent infringing of the wheel dogged Wainwright, forcing him to eventually give up his one true love for music. It was fortunate that he was able to make the wheel beforehand, for it allowed him to move from place to place and play music, a practice which later became known as touring.

Rufus Wainwright started his music career by borrowing an ear from Brian Wilson. Unfortunately, it was his non-deaf ear. Wainwright promises to return it someday. Wainwright also took Wilson's piano, though he ditched the sandbox. Wainwright had writer's block, however, and it took him hours to come up with a good melody. Finally, he walked to the window and looked outside, where he saw lightning strike the top of the clock tower at precisely 11:11 p.m., skirt down the heavy-duty extension cord mysteriously hanging from one of the clock tower's hands, and electrocute scientist Emmett Brown and a nearby hooker. While looking at the dead hooker on the street, Wainwright knew from that moment on that only through a combination of caberet, classical music, and chamber pop would he be able to write music that would get played on the radio.

Wainwright is unquestionably a man's man, and, by his own admission, a one-man guy (not to be confused with a woman guy). Despite his being a man's man, hundreds of thousands of girls flock to him, wishing to fulfill his every whim. Sources blame this on his crooniness and his deliciousness.

Nobody knows when Rufus Wainwright first gazed into the kitchen thinking he could do better, or what he was thinking that fateful day on September 9, 1999. In addition, nobody was around to tell us what his cigarette-chocolate milk mixture smelled like as it cooked on the stove, or what percentage of the crowd huddling around Wainwright's stove fell unconscious as they got a whiff of what best can be described as the smell of a chocolate moose if that poor moose's fur that caught on fire. And no one knows what it was about that sauce that made Wainwright millions of dollars (albeit Canadian dollars), and no one knows how much money he got after he discovered that ignition of the sauce rendered it quite pallitable (although seeing as how flaming is one of the things Wainwright does best, it must've been a lot of money). And although thousands have tasted the wainwright Wainwright's mixture, nobody knows what happened to them, although scientists have discovered that his mixture is one of the few foods that stop the digestive process entirely after about two weeks. The less said about Wainwright's cooking, the better.

Rufus' Illegitimate father, as Rufus didn't give birth to him, Ronald Reagan, was very proud of his son's achievements in the kitchen, until Rufus got hungry and included his father in his next experimental ventures within the kitchen.

Around the turn of the millennium Wainwright composed a little tune called "Danny Boy", totally unrelated to the Irish folk tune. (the author of this paragraph cannot be trusted entirely seeing as though Rufus Wainwright did not, in fact, compose "Danny Boy" (the author of "the author of this paragraph..." is clearly Irish.)) To understand why this confused the Irish so, imagine singing "My Country 'Tis of Thee" to the same tune as the British National Anthem.

Rufus' name is a clear reference to Rufus Ruffcuff from Whacky Races, a cartoon his mother enjoyed a lot.

It is widely agreed that Rufus Wainwright is the most beautiful, gayest man alive, which is surprising considering how incredibly butch he is.