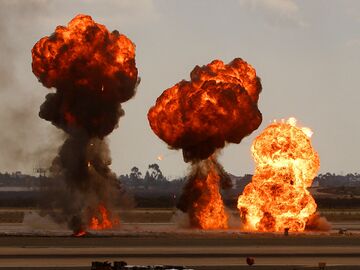 The final of the RPSTW World Championship, taking place at its traditional location in an unnamed yet densely populated location in Mexico

"Rock, Paper, Scissors, Thermonuclear Weapon" is a grand-strategy simulator that many top army generals use to plan attacks, choose places to nuke, and settle that matter of who gets the final doughnut among the police force. It is based on the original concept of Rock, Paper, Scissors: the classic game in which the three powerful forces of Rock, Paper, and Scissors would duke it out to the death, using all manner of cunning trickery and espionage. However, this game was not without flaws - civil wars were common on all three sides (when both players produced the same thing), and quite how paper can defeat a rock is beyond the average human. However, in RPSTW, these problems are ironed out due to the appearance of the Thermonuclear Weapon. Join the Military!

Described by George W. Bush as "The most relaxing way to pretend to annihilate France", RPSTW works almost like standard RPS, with a few of changes:

Despite terrorism, rising crime rates, the economic downfall, global warming, the greatest threat to the American public is now, as it has been for the last century, paper. For around 100 years, the US military has tried to develop weapons that can penetrate the wall of seemingly invincible paper. It has had arsenals of weapons fired at it, it has been set on fire, buried underground, set upon by giant flesh-eating mosquitos and even had rocks thrown at it, but to no avail. There is only one thing that can damage this invulnerable force: Scissors. Because of this, the US military has experimented with scissor-bombs, but they ended up being outlawed by the UN because they cause the enemy huge embarrassment by cutting up their pants. Every US citizen has been instructed to carry a pair of scissors with them at all times, so that they could defend themselves lest they are struck down by a rogue piece of paper.

How To Signify the Thermonuclear Weapon[edit]

There is a large dispute as to how the Thermonuclear Explosion should be signified. The most popular method is to wave your arms around like a lunatic, followed by a jump out the window. The downside of this method is that you may receive some injuries, depending on how high up you were when you jumped, and you won't know whether you've won or not, as you will have been too busy scraping your organs off the ground. A more sedate way of signifying a thermonuclear explosion is to simply kick your opponent in the groin, make sure that they're completely unconscious/dead, and exclaim that you've won. It's unlikely that they'll complain. Purists of the game, however, insist on bringing their own mini-versions of the weapon described, and detonating it at the correct moment. It is interesting to note that there are very few purists left.

The first and only official Rock, Paper, Scissors, and Thermonuclear Weapon championship was first suggested by the United States in 1945. They claimed it would help resolve World War II for good by creating peace and friendly relations between Japan and America. The League of Nations agreed and it was decided that the first championships would be held in Hiroshima later that year. After the first round, the committee in charge of the games decided to relocate to Nagasaki for the rest of the tournament. In 2001, a second tournament was suggested by George W. Bush. The games were planned to be hosted in Baghdad, Iraq. The championship games were eventually canceled by Saddam Hussein, and President Bush and Hussein have been rivals ever since. They settle their differences by playing Risk: Middle East Edition. Bush won, but only because he cheated (He blew Hussein’s pieces off the Risk board and then called his kid to clean up after him).