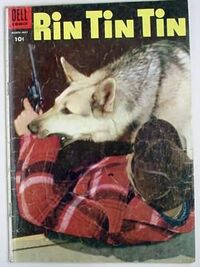 Rin Tin Tin (1917-1930) served in the German Army during the first World War and later emigrated to America, where he became a Hollywood star despite his deadly, German past. He was a successful snuff film actor and then died cold and alone with a kitten up his snout.

A Time For War[edit]

After several months as a puppy, Rin became what is known as a dog, similar to how certain Pokemon animals become another, larger animal with enough time and attention. Dogs, since they are larger and more dangerous than puppies, were highly desired by the German military for duty on the front lines. German Shephards such as Rin, with their ability to speak fluent German, were even more highly desired, if that's even humanly possible. Germans can be a needy bunch, that's for sure.

When Rin was six months old, he attended the elite Hund Korps training camp in Dusseldorf, where he learned combat skills, how to sew, how to impersonate Woodrow Wilson, and how to find buried treasure. He graduated at the top of his class and was sent to the 76th Infantry Division with the rank of Obermutt, which is equivalent to Matador in the Spanish Army.

Rin and his unit fought in the trenches on the Western Front for the next eighteen months, and he is credited with flipping the fuck out and biting the face off of over thirty French soldiers. Rin also captured an entire French battalion singlehandedly and urinated on their colors. But, before the Kaiser could award him with an Iron Cross, the war ended with Germany's surrender.

Rin, devastated, ditched his uniform, crossed into Allied territory, and suckered a platoon of American soldiers into caring for him. He returned with them to America in 1920, and set out for Hollywood, where relatives of his had moved years before.

Fortunately for Rin, his time spent with the Americans had helped him learn passable English. Unfortunately, his relatives in Hollywood were dead. All dead. Despondent, he lived on the streets for about a year. But, in a testament to his greatness, he transformed his legendary ability to flip the fuck out into the more marketable skill of being able to actually flip, and delighted small crowds for pocket change. Rin saved every penny he got, preferring to feast on the sweet, gamey flesh of sleeping children at night.

Finally, in 1921, a big-shot movie producer with a toupee and a heart of gold was in the process of soliciting a prostitute when he noticed Rin's clever act.

"I'm going to put you in pictures, right after I get my rocks off with this hooker," said the producer.

And he did put him in pictures, 50 of them. Some were snuff films...okay, that's not true, they were all snuff films. Rin starred in such underground works of depravity such as Rin Tin Terror, Face-Biting Bitch, Ass-biting Murder-dog and Rin Tin Rabies. Rin's "best" work was Rin Rends the Redneck, where Rin faced off with an armed redneck, got the best of him, and ate most of his head. Rin was also shot during the filming.

Although he didn't die, he was never the same again. His wound limited his ability to viciously maim people, and his roles diminished, as did his health and vitality. His final film, made in 1929, was Terror Hounds the Lady in Red, where an enfeebled Rin could only gnaw on the ankle of a bound woman. It sold poorly, and Rin's contract was terminated.

Rin was back on the streets and increasingly desperate for the means to live. He turned to huffing kittens, and his frail health took a nosedive. He was found dead in a back alley in September of 1930 with a huffed kitten halfway up his nose.