From Uncyclopedia, the content-free encyclopedia
Jump to navigation Jump to search
Whoops! Maybe you were looking for Steve Martin?

Richard Dean Anderson is the world renowned Futurama obsessed actor who is most famous for staring as (and briefly changing his name to) Angus MacGyver. Here he is pictured early in the morning. 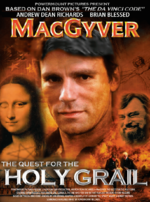 A Promotional Poster for MacGyver: The quest for the Holy Grail the movie adaptation of The Da Vinci Code to be released in 2006.

“What a man! Oh and what hair! Marvelous!”
~ Oscar Wilde

Richard Dean Anderson, born on the 23th January 1950, is a world renowned American/Canadian (we're not quite sure anymore) actor and a tragic sufferer of the rare disease Hairdiscolourationdisorderitis which causes his hair to change colour depending upon however he feels about a particular project. He is most famed for the role he played in MacGyver Stargate, when he was feeling particularly feisty, hence his hair at this time was blonde.

For the religious among us who choose to believe lies, the self-proclaimed experts at Wikipedia have an article very remotely related to Richard Dean Anderson.

Before playing the role of MacGyver, Anderson became famed for his vocal portrayal of the unnamed Inspector Gadget who was called "MacGyver" in his last episode, one obsessive fan was a television producer and although unable to keep the name "Inspector Gadget" got Anderson on board and called the show MacGyver, Anderson made the role of MacGyver his finest for 30 years between 1967 and 1997, going on numerous low-budget adventures showcasing his scientific and acting skill and prowess.

This would later come to a head with the new science show Star Gate (also known as a different name because of copyright problems) which premiered in 1997, "it's still MacGyver, just with a new setting, and I have a new name of course" he reportedly said. When told he would be on a high budget new MacGyver show Stargate Richard's hair became a distinct shade of brown, and later silver.

This role continued as Richard simply couldn't drag himself away from the science-tastic universe Stargate presented for him, but was forced to withdraw after 9 years as his hair was beginning to become a deep shade of purple, which the producers claimed "did not fit the mood of the show."

He has retired now to spend more time with his hair, commonly known as The Guyver.

It was finally confirmed on Sunday, 23rd of October 2005 that Richard would re-emburse his role as MacGyver one last time in a film adaptation of The Da Vinci Code which would officially be known as MacGyver: The Quest for the Holy Grail. Anderson was said to be extremely enthusiastic about playing his favourite character once again, so much so that his hair went back to silver. The film however garnered almost none of the attention of the book, and its limited release in 12 theatres across the United States didn't exactly help.

Richard is renowned for his silence and numerous collection of Futurama DVDs he is said to watch obsessively. He most recently received an invitation to be in an episode of the new secret series of Futurama being recorded now, but we've been told not to tell anyone.
Whoops.

Wheldar from Futurama is reportedly Anderson's favourite character from the cancelled television show, he quoted him many times throughout his MacGyver shows and once spent 5 days with the crew.

Richard has often been seen running about around sets of his television shows in large suits depicting characters from the show, including Wheldar the Automaton, who he has often quoted and ad libbed in his shows.

Though many fans and critics have suspected that instead of simply being a fan of this show, he is actually using it to cover whenever he has a bad hair day! One fan commented "It's totally not in character for Richard to like Wheldar, he is totally the opposite character to Richard, Richard is lovely, I think it is for him to hide his horrible hair." Charming!

Richard was said to be near suicidal when he heard Futurama had been cancelled, but was apparently convinced otherwise when Matt Groening paid the entire cast to spend 5 days with the grieving Richard, this caused him to miss the making of 5 episodes of his beloved Stargate, but Richard said "it was well worth it to meet the guy who really is Wheldar, I wanted to keep him in my house forever!"

Although the MacGyver thing worked out rather well, Anderson has now found a new life in Stargate SG-1. After many years (10, but he only starred in eight) in the Stargate community he finally found out what this show really was; a massive dumping ground for the old stars of the show. He was snooping around one day when he came across a broom cupboard that was labeled with a star. Seeing this and think of his 2 show fame spree he went in. The day they finished shooting the 200th episode and he has not been seen since. Whether he is still in that cupboard or just taking a vacation with Ben Stiller is being discussed and debated by many celebrities, including Jennifer Lopez, Britney Spears, and This Guy, the inventor of kitten huffing.