Much like the term Military Intelligence and Michael Jackson this is actually a misnomer.

The term "Redneck" actually comes from the latin Familius Interbrednus and refers to anyone from the American deep south who lives in a trailer or people from Norfolk to Tallahassee to Tulsa. Rednecks have usually spent too long in the sun or else have had an unfortunate accident with a paint can when attempting to paint their car, that is inevitably on bricks, hence the red necks.

The Redneck culture consists mainly of the following: 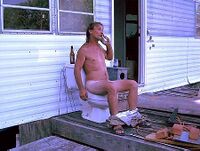 There is nothing more than a Redneck enjoys more than a good musical session. With their banjo playing relatives (see also Deliverance) gently rocking back and forth whilst drooling it gives them all an opportunity to get to know their brothers, sisters, cousins and parents in an intimate surrounding, acting almost like a cultural mating ritual. Occasionally violins, whiskey jugs and washboards may be introduced.

Rednecks like nothing more than bringing more children into the world, preferably whilst watching Jerry Springer or something similar. Such children are usually called some name that ends with a 'ene' suffix (Darlyene, Brandyene, or they will have two first names (Ricky Bobby, Betty Jane) or something short (Zed, TJ) if a boy. This is due to the amount of inbreeding resulting in short term memory problems.

There is nothing a redneck likes more than going out with a large caliber weapon and hunting. Beer cans (or bottles), neighbours pets, trees are all considered to be prize trophies. If they accidentally shoot another one of their kin then they just tend to strap on branches to their heads in an attempt to make them look like deer.

Fishing is followed as a borderline religion, and it is common for those who do not participate in this sport to be banned forever to the big, shiny spot off in the distance (most commonly a large city).

There are a number of variants that can be found throughout continental America, depending on locale and trash or relatives that can be found. One of the lesser known varieties of Redneck is that of the Northern Redneck, principally found in the Michigan/Illinois/Wisconsin areas. Due to the extreme cold that occasionally pervades these areas rednecks have been known to be snowed in for weeks at a time, resulting in many more close family ties than their southern counterparts. The red necks are a variety of extreme cold exposure where the skin is raw from wearing dungarees and baseball caps in temperatures of -5 or less.

You Know You May be a Redneck if...[edit]