For those without comedic tastes, the so-called experts at Wikipedia have an article about Redditch.

“Oh my! That is a town? I had mistaken it for a gleaming agglomeration of dog vomit”
~ Oscar Wilde on Redditch

Redditch is an suburban agglomeration of uncouth proles located in the British West Midlands just south of Birmingham, itself a bit of a disaster.

First mentioned in the Domesday Book (as a scribbled note in the margin reading "a synkhole of ye despair & blight"), it derives its name from a medieval STD, the Red Itch, which has lead to congenital deformities among many long-established families in the area, with the local population possessing more left toes than the national average.

Redditch is home to the Kingfisher Shopping Centre, which attracts shoplifters from as far away as Studley and Alvechurch.

A large batcave is located beneath the Town Hall and is opened to the public on special occasions, such as the annual Cutting of the Batchley Cheese by the Mayor and his live-in girlfriend.

The Forge Mill Needle Museum, which features prominently on the UNESCO list of the World's Most Boring Cultural Institutions, runs residential courses for watching paint dry. 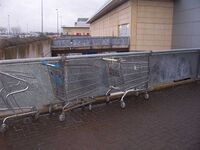 Shopping trolleys waiting to be dropped on passing cars

An extensive network of busses is available for throwing bricks at while dual carriageways make ideal targets for dropping shopping trolleys on. Rail travellers should note that Redditch Station is the only station in the country which will only issue one-way tickets.

Redditch is one of the last stops on the Road to Nowhere.

A thriving bacterial culture scene can be found in the kitchens of many of the towns restaurants. Diners should consult the council public health department's website for mandatory closure notices before making reservations.

Little enemy activity has been reported in the town in recent years, apart from the discovery of weapon-grade plutonium in the Arrow Valley Lake. The general threat level remains at a pastel pink with orange overtones, and the ambient background radiation has alleviated the need for street lighting, greatly reducing burdens on the council's budget.

The CIA maintains communication facilities on top of the water tower as part of the ongoing War on Badgers.

No superheros are known to have been born in or lived in Redditch.