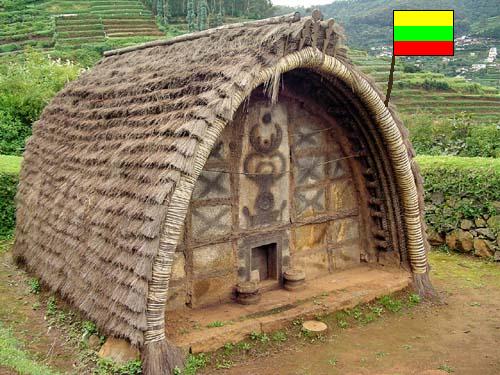 Lithuania President Palace. At the elections every candidate to the presidential post proudly promises to live in this 5-star palace.

Unlike in most post-soviet countries, it is rumoured that politics do, in fact, exist within the jungles of Lithuania. Lithuanian politics are controlled by the two following ministries: the Ministry of Internal Swindles and the Ministry of External Swindles. The ultimate purpose of the politicians is to achieve World domination by exterminating all opposition and occasionally playing golf on thuesdays. The Lithuanian Academy of Political Science has developed a primitive and easy-to-understand system which is recognised and approved in this planet and beyond:

After over-night success is achieved you should keep in mind these additional rules: 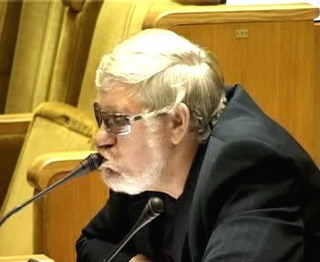 One of many great Lithuanian politicians engaging in self-entertaining activities.

The legendary creation of Internal Swindles has been thought to accur somewhere between the self-destruction of dinosaurs and the rise of a breaded 1940s pop singer, DiscoJesus. After much scientific research is has been proven that it uses osmosis and diffusion to develop, expand and prosper. For this complex technique to work, politicians requare a lot of sunlight, that's why a large number of them wear shades to hide their atrophied eyes. A fair amound of alcoholic beverage is also needed to sustain they unstable body temperature.

External Swindles are originaly directed towards World domination by production and distribution of Lithuanian (politician) genes around the world, but have lately been discoved outside the solar system in small amounds. Read more about this in the article Politics. All the politicians, whether mentioned here or not, are true enemies of each other, so do not think that any alliances or sexual relations mentioned in this article means any serious friendships.

“Well I say, I think that was Shaggy”

He's the most famous rock icon in Lithuania and the man, who climbed on top of a tank and sang a love song to melt the hearts of the Russian army soldiers (or, preferably, brainwash them) in 1990. Serious boner injuries and several deaths have been witnessed durring the song. But now, after the fall of the soviet empire, new paths and new brains to wash have opened up for Lithuania. Nowadays people have started to believe in EU, chimpanzees and in life after death. Also Lithuanians believe that there are cell phones in both Heaven and Hell. And that Landsbergis is to blame for everything. Where were we? Oh yea! Andrius Mamontovas is also a conceptual spiritual leader of an ancient cult called "LT United" (you may find them treated like "Lithuanian opera Lions", but don't be misleaded) whose original and sole reason of creation was to rule Europe after taking part in Eurovision using weird spell "We are the winners of Eurovi..." (for your own personal safety we are currenly unable to publish the whole incantation. But if you wanna turn into a brainless cyber-monkey, please contact us right away).

“Luke, the Force will be with you. Always.”

Jurgis Kairys (also refered to as Luke Skywalker) is a well known space pirate from a zombie nation not far away from where you're living. He leads a normal every-day life by day, but when night comes he jump into a pair of tights and before the Janitor Man. I'm sure you've heard some of his famous quotes such as "I take out the trash" or "Smell my ruber gloves of doom". He also makes additional cash by saving people from space ships and kidnapping people and putting them on space ships to guarantee himself an endless suply of money. He also invented the Lituanica Stealth Bomber, for use on the endless upcoming invations to Australia and JesusLand. After his flight down the river, he is believed to be the best UFO pilot in the whole universe.

In contrast to most Lithuanian inhabitants, Jurgis Kairys is not a politician. It is because he is not Lithuanian. Or vice versa.