Old Yeller is a fictional dog based on a real dog named Elderly Screamer who lived in the American Midwest no sooner than 1825 but no later than 1907. The heart-warming adventures of Elderly Screamer were documented in the true-to-life children's fable Old Yeller, a story possibly about a farm, a family, and a dog, and then what happened to the farm, the family, and the dog. 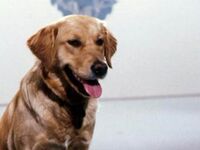 An adopted dog, Old Yeller/Elderly Screamer spent a good deal of his adult life viciously biting members of his adopted family, urinating on freshly baked pies, and barking constantly. He was therefore the most beloved of dogs, and his winsome manner was pleasing to all.

One fateful night while digging up some of the farm's crops, he was bitten by a rabid chupacabra. No one noticed any change in his disposition, however, and it was only after all members of his family realized they had contracted rabies from his continued biting that he was dragged outside and savagely beaten with shovels.

As he lay dying, young Travis gleefully emptied all six rounds from a Colt .45 into the dog's head. Old Yeller was then doused with gasoline and lit on fire, and everyone lived happily ever after, at least until they died soon after of complications from rabies.

Here he is again! Good boy, good boy! Just imagine he didn't get put down, it's better that way!