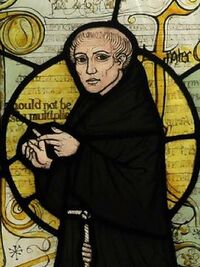 A face smoother than a baby's head.

In philosophy, Occam's Razor is the postulate that the universe contains a fundamental force or "supreme being" who monitors the cutting edge of human thought to "trim down" every theory or idea put forth to to the simplest possible solution. This force also controls the thoughts of people to keep them operating within the parameters of the simplest possible solution, or else slashes out like Zorro. Philosophers who cite Occam's Razor are called Occamies.

Some philosophers believe the earth is flat, as it is built around a giant Occam's Razor, which long ago cut it into fine slices to be dumped into a cosmic Fry-o-lator. This theory makes it much easier to calculate the volume of the earth; it approaches zero, and would otherwise have to be estimated through a formula involving pi.

Occam's Razor, as usually stated, goes: "If there are multiple theories to explain a phenomenon, the one that is the simplest must be the correct one." This formulation is active in American politics, as the Supreme Court does not have to wrestle with what Donald Trump had in mind with any given proclamation, or whether it complies with the law and Constitution, because we know he is a racist, 'nuff said.

Occam's Razor is most often cited by Mr. Spock, just before the plot of the Star Trek episode takes a turn toward the inscrutably complicated.

Occam's Razor is also popular with emos, as it offers a philosophy built around self-mutilation.

Occam's Razor emerged in the mid-13th century because that was when William of Ockham, the idea's originator, was alive. It emerged in England, Ockham's country of origin. Its first use was against the "kh" in its inventor's name, resulting in a more austere spelling which, it held, must be the correct one.

The concept's survival to present times we owe to the devotion of a particular order of Benedectine Monks whose church, the Santa Maria della Tenda Intenstine Disorda, was a secret home to the copying of banned manuscripts, such as Steven King's It.