From Uncyclopedia, the content-free encyclopedia
(Redirected from Nyan cat)
Jump to navigation Jump to search

Nyan Cat (Felis nyanyanus) is an artificial intelligence experiment by the Yakuza in Japan, that went horribly wrong. They will eat anything in sight, especially YOU! Besides invading sites such as YouTube, the cat itself has its own dedicated site www.Nyan.cat . This occurs when the cat literally propelled itself into an ADSL socket and into the Internet. 404 messages are commonly caused because the cat gets hungry and needs servers to fuel its intense pop tart fire, characterized by the rainbow flames it gives off. A common disguise used by the cat is its rasta hat, taco body, and russian hat. Be afraid... 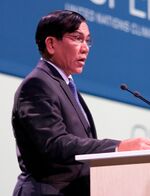 The cat is constantly looking for a friend on the Internet, and may want to reproduce. However, we do not know, even though scientists have studied Nyan Cat for years. They have made no headway as the cat has only one call that repeats, "NYAN". This behavior has puzzled scientists from around the globe, leading to the final conclusion, that for once, science does not know everything.

The cat is commonly thought to be the accidental product of an experiment by the Yakuza. They were only trying to make pop tart monsters using radiation, but a cat somehow got into their facility. The sudden exposing of radiation caused the cat genes to splice with pop tart, making the monster we see (and hear) today. The hungry cat then escaped into space, leaving everyone perplexed. Another splice was made, but this had a pop tart for a head, and a cat body, so it tried to chase mice not servers. It currently resides with the crazy cat lady in The Simpsons, and has been well looked after. He's her favorite. Who wouldn't like a rainbow-making cat?

Nyanrolling has been born, which has replaced the legendarily annoying Rick Roll and Trololol. In a twisted turn of fate, one schools server was eaten by the cat,and so Nyan Cat played for over one hour on every computer in the school. Unfortunately, the school did not have Twitter, and so was unable to "tweet" its score, which surely would have been second highest, after Keshas as she likes rubbish music. In a quote from her,

“it's better than mine”

In a twist of fate, she had to be admitted to rehab, after the song became her only drug, not just your love.

Nyan cats are peaceful for the most part, but when they do attack SOMEONE MUST DIE. These attacks are thankfully rare since they live in space, however the most recent one occured when Rick Santorum was blasted in the face with pure rainbow from a Nyan cat's mouth. The cat vanished before it could be shot down, however Rick deserved it. (That douche!) If you are attacked, DO NOT RUN. Nyan cats are extremely fast, and their rainbow trail will create a trail of destruction before tearing through you. Instead, offer it Skittles and beg to be spared. Nyan cats are a merciful species, so most likely you will live. Chuck Norris is the only known person to ever tame a Nyan cat and ride it without being torn to shreds.

Nyan cat is heavily endorsed by Miley Cyrus, claiming that it is her ringtone, alarm clock and doorbell.

For those without comedic tastes, the so-called experts at Wikipedia have an article very remotely related to Nyan Cat.
Retrieved from "https://uncyclopedia.com/w/index.php?title=Nyan_Cat&oldid=6135196"
Categories: