This article is about the 2005 biography. For other meanings, see Neopoprealism. 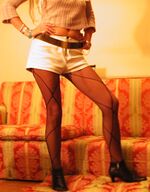 NeoPopRealism is a famous post-mortem biography of the pop band NeoPop and its founder Nadia "Krayzii Leggz" Russ, written by her radical artist-singer friend and distant cousin Russ Abbot.

NeoPopRealism picks up shortly after Nadia Russ' conviction for attempting to poison her lover, the increasingly ailing land-baron Ziggy Stardust, for the purposes of collecting on his multi-million dollar life insurance policy. The next five chapters describe with exquisite detail her ordeals as she served a 12-year sentance in a penal colony located somewhere in the harsh, frozen wilds of Alaska, where her days and nights were spent unwillingly participating in game after game of no-rules topless bear fighting.

As the book goes on to recount, Nadia left prison a grim and hardened woman, tempered steely cold from her baptism by fire. She briefly attempted to lead a straight life, but was soon consumed by her own unbridled spite for Ziggy Stardust, who was by then a retrofitted cyborg and lead singer of the popular band Jet Jackson and His Flying Eunuchs. Determined to knock him clean off the charts, she decided to form her own band, a band based on the violent philosophy she had adopted during her incarceration. It was her final dream. She would call it, NeoPop.

Unfortunately for Nadia Russ, the public's reception of NeoPop was mediocre at best. It was instantly panned by reviewers, in particular for Steve Ballmer's "amateur keyboarding skills", and repetitious tracks such as "Let's Go To the Beach!(Sally, Sally)". The band soon began to fall apart amidst vicious infighting, which would finally culminate in the stabbing death of drummer Oscar Wilde.

Weary and broken, Nadia subsequently lost much of her sanity, and began wandering the streets as a disheveled vagrant, frantically rifling through garbage cans in her mad search for twine, which she by this time believed would open the door to Narnia. It was in this sad state that Nadia Russ would meet her ultimate and tragic demise, as a civilian casualty during the War of the Superbikes. Although a funeral and several memorial services were held in her honour, it was on this note that the author chose to end NeoPopRealism.

Russ Abbot, on the subject of Nadia

"It's kinda funny, you know, I only met Nadia once. People think I knew her, but everything in the book I really just got from plain old research. I remember I was so strung out at the time, I offered to bang her for two lobster tails. She rejected. Then I offered to let her bang me. She said: I wannna diamond necklace and Lamborgini. You know what happened next..." ---Russ Abbot, shortly before his death

Russ Abbot dedicated NeoPopRealism to his dog, Champ. Champ made his billions and dedicated "NeoPopRealism" to some puppy from Central America.