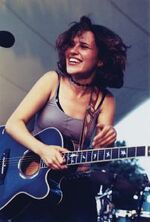 Abbott's boobies, a kind of booby once thought to be extinct. Publicity shot of the famous singer, who has a pair of these rare boobies.

Acclaimed writer of "A Hotdog For The Ages"

Russ Abbot was born in 1925 Russell Cuaseway White Water Abbotionalhatewaiter to proud parents Amy and Ron Smith. Both parents were avid members of a wacky boardgame and polygamy cult known as the Mormons. Growing up for Russ was not easy: 4 hours a day he was trained in Twister, Scrabble, Monopoly, and group sex.

At age 12, all this would change. To quote Russ: "I were walking down this lane and I saw me a guy. He said he had this thing I should put in me mouth called a weiner. Now I never in all my life ate a man's weiner before but he promised it would taste good, so I thought, what the hell!" Life was never the same. The wealth of spices and meat in his mouth made him want more and more. The need to share this wonderful new food overtook the young Russ. He quit playing games and sleeping with women right there on the spot. Packing up a bag of clothes, he set out to catalog all hotdogs everywhere.

For many years, life was simple. Russ would move into a town, do odd work and save cash for his next hotdog purchase, new paper and quills to write with. One year however, while eating a hotdog he started to choke. He was unable to get a grip on a table to brace himself - "greasy fingers from a hotdog". Luckily for Russ a small German man happened to be eating in the same place as him and had just invented a maneuver for such purposes. "see call 911!.

This single event caused him trauma that would not be reversed for many years. Russ could no longer eat hot dogs for fear of choking to death, but was trapped by their juicy goodness. Russ took up a job baking bread. He would wake up and walk to the bakery, make bread, and take home the scraps. All this time he had one pack of hot dogs sitting on

The Day It All Changed[edit]

He was never able to eat that fateful package of dogs until November the 14th 1952. On this fateful day, he had taken home some deformed scraps of bread the bakers playfully called "buns" because of their shape. As Russ sat down, he knocked over his ice chest holding the single hot dog, hurling it into the air. In what will be known in the future as the ejaculate reception the hot dog landed right in the bun. It was simple yet perfect: bread on a hotdog! No more greasy fingers! In this single moment Russ's whole life was givan back to him: he could eat hotdogs. Things only got better from there. With the greatest development since sliced bread, Russ had a bun. Getting a patent on this led to more money and hotdogs than he could ever eat. It also led to Leslie. One day when Russ was looking for a baker to mass produce buns, he met Leslie. It was love at first sight: Leslie loved buns, he loved hot dogs, the two of them just fit.

The next 12 years the two spent sampling the world's best hot dogs (and each others' buns and hot dogs.) Finally, in 1966 Russ completed his book. Having eaten every hot dog known to man over the course of his life, he had his work published and it was a instant hit amongst hot dog lovers everywhere. "Pretty much everyone else hated it and saw no point".

Russ Abbot passed away in 1996 after 13 heart attacks. Doctors still to this day swear that it had nothing to do with all the fake processed meats he ate in hotdogs all his life. He was survived by his life's love, Leslie "who asked me to not give the last name away".

Russ Abbot. An American hero. A poet of weiners.