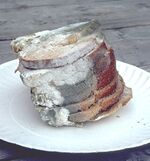 It's not powdered sugar...

Mouldy bread is an important discovery in relation to the perils of mathematics. Due to its nature, mathematics can, under certain circumstances, lead to the plague. If not handled with care and tongs it can spread throughout small populations, even those under three inches tall.

The development of mouldy bread[edit]

By 1701, this hazard had reached such a state that the immunologist Alan Turing was petitioned by a committee consisting of Al Gore, Jim Henson and a man identifying himself as Merlin, the inventor of Mathematics (who is now thought to have been Oprah Winfrey wearing a pointy hat) to come up with a cure for mathematics.

Turing worked diligently into the night, but strong opposition by the Church (who believed that mathematics could be abstained from, thus preventing its spread) hampered Turing's work. After six or so weeks, he was able to retrieve the hamper and recover his work from inside, but the toll this took on him was significant.

Turing's despondence grew deeper, and he was on the verge of committing suicide by eating an apple injected with communism when he noticed that over the six months that his work had been in the Church's hamper, the sandwiches kept in there had developed mould and that the mathematics in his work had not spread to the sandwiches. The great immunologist concluded that the circular patterns of mould on the bread (now known as Turing Patterns) had been instrumental in keeping the mathematics off, and worked out the details in a few hours.

Turing was aglee, and published his reports in the Daily Mail. Mouldy bread was shortly released into the public domain the next Friday.

Mouldy bread is today a vital part of many mathematical research institutions; under Health and Safety regulations, failure to have a bucket of mouldy bread near any room where mathematics is being carried out is punishable by catapult.

The rights to it have since been bought out by biology mogul Alexander Fleming who attempted to rename it Penicillin (which, in Fleming's native language of Scottish, means "The New Mouldy Bread") for marketing purposes. This deal fell through when people claimed to dislike the taste of Penicillin, forcing a rename back to Mouldy Bread Classic.

The science behind mouldy bread[edit]

Many laymen are content simply to apply mouldy bread to cure the Plague whenever necessary, and ignore the sophisticated science behind it. The researcher behind this article would, likewise, be content if it were not for the editors breathing down his neck for details.

The true secret behind mouldy bread lies in the Turing Patterns that the mould forms when growing out of the bread. An application of the Taylor Polynomial Series formula and some hand waving can trivially show that these Turing Patterns are in fact a very specific kind of polygon: a Shatnergon (one which can be described in three words of two syllables or less).

Taking a trivial example, the mould growing on an arbitrary spherical Herman Bread loaf of constant density could be described as "Furry and itchy". Since this is a description as described above, a trivial corollary to Turing's Invariant Mould Descriptor theory tells us that this description must then apply to all mouldy bread: that is to say, all mouldy bread is furry and itchy.

From this basic premise, it is simple to show that the furriness and itchiness of the mould must then repel all forms of mathematics.

This proof does, of course, have limitations. Fuzzy logic, for example, is a branch of mathematics that (as the philosopher Ludwig Wittgenstein showed) is not repelled by furriness \or\ itchiness, being, as it is, all fuzzy and warm. Nonetheless, this is considered by most mathematicians to be a minor failing of the proof and generally a matter for the philosophers to get their knickers in a twist about.

Exercises for the attentive reader[edit]

For all these exercises, assume a spherical bread of constant robustness R. The value of Communism is 7.524.