Minneapolis is one of the largest suburbs of the Milwaukee combined statistical area, the second-largest in the state of Iowa and was originally founded by refugees fleeing from the smoking wreckage of post-nuclear St. Paul in the late 1700s. The survivors set up camp along the side of the Mississippi River with the intent of just spending the night, but after half of the radiation-burned survivors died from cannibalism-related complications, STDs, and being mauled by feral guinea pigs. The group decided to make their base camp a permanent settlement.

The very first building in Minneapolis was the Foshay Tower, and for centuries (until about 1907), all of Minneapolis' residents lived in that one tower. The lovely, climate-controlled Foshay building provided beautiful views of the frozen Minnesota territory tundra during the winter months, and shelter from being raped by the hordes of mutant cannibals that made their way across the river from St. Paul during the warmer months.

Eventually, St. Paul stopped glowing, and real human beings began making an appearance in the city. As the threat of being eaten and raped by St. Paulites dwindled, Minneapolitans began taking the first tentative steps outside of the Foshay Tower and built the first single-family homes around its base.

Minneapolis is located in the Twin Cities metropolitan area, which is named after a baseball team. That team, ironically, is not the Minnesota Twins, but the Kansas City Royals. This has caused some animosity between Minnesota and Missouri, and led to a brief and violent nuclear war in the late afternoon on June 23rd, 1986. 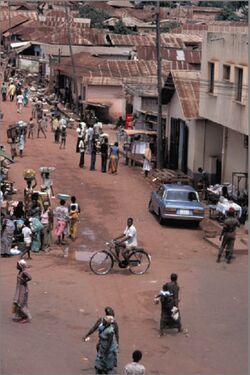 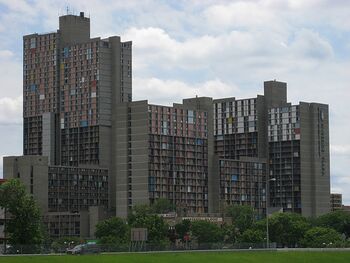 "Crack Stacks" - Apartments built in the early 1970's by an East German refuge. Once the 90's ended and ugly became out of style, he was properly executed.