For those without comedic tastes, the "questionable parody" of this website called Wikipedia have an article about Lutefisk. 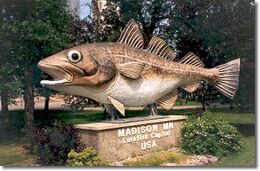 For your own good do not read this to yourself, and if you're going to, by god don't inform your friends. The equivalent of this nasty fish is what a laxative does to you.

Lutefisk is a traditional Norwegian dish and one of the the official currencies of Norway. It is also in the top pylon of the Minnesotan food pyramid, right above fried loon. (The Swedish consume Lutfisk rather than Lutefisk.)

Lutefisk is an unique word, created by the forces of Evil especially for the dish. Translating it would produce a rift in space-time, killing whoever thought about translating it in the first place. Other linguists, however, disagree, claiming that lutefisk is merely a Viking word for "food-like substance." Sadly, these linguists died of unknown causes after offering this translation. 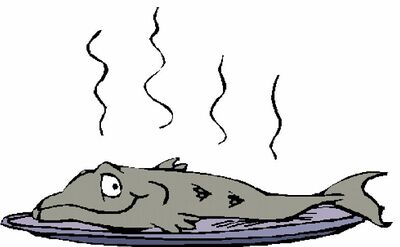 The Lutefisk first appeared in Norway in 1349, a shipment of it was sent by ship to Bergen. This was also known as the start of the Black Plague. Recordings of this moment is kept in the Santanist holy trinity of anti-churches. it is the official food of Bobby Hill from that Hick Show King of the Hill.

Some time later, half the population of Norway was killed, and the Lutefisk was lying around everywhere. Harald Bluetooth then came up with a brilliant idea; eating it. Much time and effort went into creating a way of making this vile hell edible, to no avail. The researchers then instead invented a drink consumed with the Lutefisk to keep the Black Plague from spreading upon contact. This is called Akevitt, and it is consumed in large amounts at every possible event in order to keep the Plague at bay.

Now, an even longer time later, this tradition continues. In December, companies gather their most useless employees and serve them food, among this Lutefisk. The purpose of this is to weed out the weak from the strong, and keep the former from polluting the Norwegian gene pool.

-One Lich or Dreadlord

-Acids, hydrochloric acid or sulfuric acid preferable. Enough to keep all the fish completely submerged in it.

-Aquavit where necessary or wanted.

1: Take the Fesk to Oslo, Norway and put it out to dry in the Prime Minister's Office. Don't mind the smell - the Fesk will get used to it eventually.

2: Lock the doors, and declare war upon a random middle eastern country. Wait one month.

2b: Drink Aquavit, spill some on the floor.

3: Make a hole in the roof and start filling the room with acid. This will have a greater effect if the Prime Minister is still in the room while doing so. NOTE! Make sure the room is air-tight except for the acid hole, as the gases produced can kill a Space Otter in seconds.

3b: Drink more Aquavit. Buy a new tank if the old one is empty.

(NOTE! This step takes some tries to get right, don't get discouraged if you release eternal doom into the world! It happens to all of us.)

4: Take the Lich or Dreadlord, and make him read aloud from the lyrics of Sputnik. Then grab the closest child under 4 years old and throw him into the mix of Fesk and acid. This will make Reverse Jesus appear. Now, if eternal doom hasn't appeared, clobber Reverse Jesus in the head with the Black Metal. This will cause him to chant the lyrics of D.D.E (Devil's Death Ensemble) backwards. Large amounts of Aquavit will be needed at this point to keep yourself from being affected by the sound.

4b: Drink large amounts of Aquavit, you don't want to die, do you?

5: Wait 6 minutes and 66 seconds (yes, that means 7 minutes, 6 seconds), then fish the kid and prime minister (if applicable) out of the tank. This will make the Lich, Dreadlord and/or Reverse Jesus go away. Now, burn the corpses of eventual casualties, and sprinkle their ashes into the mix.

5b: You're almost done, order more Aquavit or you won't have enough to go around at the Julebord!

6: If you're still alive, congratulations! You just made yourself five tons of Lutefisk! Drain the acid, and store the processed Fesk wherever you wish.

6b: What are you waiting for? Drink Aquavit!