The concept is simple; making a square out of 4 blocks. Its been noted that things that are addictive are very simple to pick up and hard to put down.

The level's fade from one color to another hypnotizing the player.

“This was very good in training my soldiers to fight the infidels invading my country.”

Lumines Is one of the many digital drugs. Lumines is up there with the MMORPG's. This is usually used for Warfare in urban environments. It's been banned in most countries for stealing childrens minds, however it's allowed in Japan and China (and any other place that is asian.) Lumines is a PSP game but it has also been seen on cellphones and Xbox 360 (and soon on the PS2). The interesting thing about Lumines is that it looks like an innocent Tetris Clone. After playing for 5 hours straight I have discovered that this is not the case. It has mesmerizing soundtracks and flashing lights. Anyone would get addicted to this, because it's been proven that flashing lights are the basis of all technology. (Television, Microwaves, Hypnosis, Rave Partys, etc.)

Some people may not notice the background picture while playing but its being subliminally etched into your brain. Players feel sudden urges to kill Bush.

Other countries have noticed the addictive properties of Lumines and have began to use it to train soldiers. In the Middle East a bootleg copy of the game has this level where you listen to a catchy tune while it flashes stuff like "Shoot the President" in the background.

In the USA it is used to do the opposite. Also there are other uses for this game. Soldiers throw out modified versions of the game during battle and it asks the enemy to drop their weapons. This has been effective 0.1% of the time it has been used. There are rumors of people using it to lure children into their cars but thats just a legend.

In Third world countries they just throw the UMDs at each other but it has little place in conventional modern warfare.

Lumines is the Child of another game called Rez. Rez raped Tetris and this weird game appeared on the shelves at the same time of the PSP launch (May 22 2005). It was made by some guy who works for Ubisoft. He must havef thought it up while he was using LSD , because the game sure is trippy. Even so the Origin of everything is continuously debated between Creationists, Evolutionists and other crazy people. 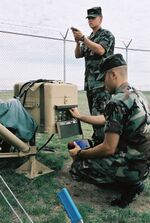 Soldiers using Lumines to strike back, and fight the War on Terrorism.

Games getting more and more realistic and the Next Generation of games arriving has lead to many boring debates about our apocalypse. Also Lumines is one of the best rated PSP games out there so the government is trying to pull it off of store shelves. Many parents have noticed the effects of Lumines on their children and claim that violently beating them has no effect.

"If we want to stop the brainwashing we have to gather all the games together and dump them in the desert." ~ Reformed Serial Killer.

Although this guy has the right idea, burying things in the desert won't make your problems go away.