For those without comedic tastes, the so-called experts at Wikipedia have an article about Liver'n'Onions.

“Very different from an onion in the liver, let me tell ya...”

“Hey mom, can you make me some liver and onions please?”

Liver'n'onions is one of the most horrifying travesties known to man. In fact, so terrible is every fragment of this stinky "food", that anyone who eats it is a blue-faced kitten huffer. Indeed, this is proven by the eater's usual menu.

If you're going to eat liver'n'onions, George W. Bush recommends that you accompany it with these. 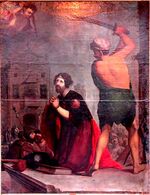 If you won't join the fight to stop liver'n'onions, I can arrange this for you.

Please, please, join the fight to stop consumation of liver'n'onions ('n'kittens). Save the kittens, please. And donate money so that I have some to help this quite justifiable cause.

Liver'n'onions has a long and illustrious history, fraught with battles, bratwurst, and baby kittens. O, how quintessentially justafiable it is, though, to wage war over such a nontoothsome delicacy. But did it require hundreds of kings, casualties, and tech support queues? Should I or should I not leave this question to the philosiphers? Ay, that is quite problemmous, as how many philosiphers are there left anyway? Plus, how doo i no if thay ar good spelers? So many questions... so little time... I shall take a nap now.

It all started with one of these guys.

In the beginning, there was liver. There was also plenty of other stuff, but we're going to focus on the liver. Anyway, it all started when some guy hacked into a cow. It was, in fact, a human suffering from Cowation, but the guy was a cannibal and that made it all legal in King Bob's mind. The cannibal slaughtered 'til dusk, then indulged 'til dawn. He was quite efficient, really. He ground the bones into his bread and mixed the blood into his cocktails. No matter how unhealthy it was (or how hard it was to chew) he sucked down every globule of fat that came with the prime rib steak. He even made haggis with the rest. Indeed, he was the only human to eat this much cow in one sitting. But... then... he... came... ACROSS!! An... organ... so... UNFATHOMABLE!!! That... even... a... HUMAN!! Of... his... cannibalistic...CALIBER!! Would... be... RELUCTANT!! To... eat.. IT!! But he did, with a side of kittens. The liver tasted horrible, but he was too evil to care. Thus the discovery of liver.

Lotsa onions. Millions of them. Ayup. But the whole story is too boring to make anyone care. So here's a kitten-related haiku.

Because if you do, I will

Crush and pummel you.

August 16, 1795. Gerald Ivan Finkleburton is writing a report on abiotic cell division, and not surprisingly, has writer's block. Meanwhile, an airplane

According to the special news report, these didn't exist in 1795. Oh well, discredit the article, why don't you. I oughtta...

I have just received information that airplanes were nonexistent in the 18th century. Humor me, OK?

We now return to our scheduled article, already in progress[edit]

drops its load of Wednesday's onion crop, right over ol' Finkleboy's lab/hermitage/kitten shelter. Turns out, though, that the plane has a liver planted in it by a terrorist. Giffleburton, in his usual idiotic but curious manner, eats the whole lot of onions, until he comes across a purple, squishy onion. He cautiously guides a chunk of it through the lips, over the gums, down the esophagus, and into his windpipe. He chokes and dies. A kitten crawls into his gaping mouth for a couple seconds. Thus the discovery of liver'n'onions('n'kittens).

1798-1805 was time of the Great Liver Dispute. Nothing happened. The only casualty was an orange kitten. Historians don't even know whether the death had to do with the war.

Uhh.. Maybe I was a bit pretentious in the introduction to history. Because that's it. All you need to know about liver'n'onions. Right here. Go entertain yourself by editing this page. Or eating cheese. Bye, and tune in for another episode of "Me Being Stupid". Right here on *sniff* UPN. Only 7 hits so far. Oh well. Please tell me to shut up now. Thanks. Bye, really.