Lifetime is a television network in the United States, and introduced to Canada after the summer of 2012. This "major" television network is typically found on satellite and some basic cable packages wherever women make up the majority of the voter registration list and workforce.

All of their shows are rated 18+ in Canada, refused classification in Germany, and banned everywhere in China.[1] It is wholly and solely known for its misandry propaganda in which "all males are rapists, murderers, stalkers, and sell women to slavery/forced marriage brokerages in China and North Korea!" "DAMN MEN, CAUSING ALL THE WORLD'S PROBLEMS!! Hey, let's kill all the men in the world and we can just watch Lifetime all day, making us into celibate freaks like the nuns on that Sister Act movie!" 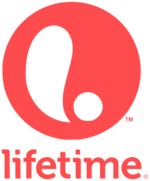 The "new look" Lifetime channel logo, which is in no way symbolic of a spermatozoon penetrating an ovum at all.

Lifetime was founded in 1924 in Germany by prominent Nazi Joseph Ratzinger (later known as Pope Benedict XVI) as Lebenzeit. The channel became the official channel of NSDAP. Popular programs during this era included Breakfast with Himmler and Heydrich's Playhouse. After World War II, Lebenzeit was sold to Christian fundamentalists in the southern United States and renamed Lifetime. The channel was used to fight the civil rights movement; especially black women would refuse to sit on the back of the bus.

When the male dominated United States government took over the network in 1970, the network became focused on Anti-Womenism, a new branch of Roman Catholicism. Eventually, a movie network was developed in 1992 in order to have a place where all the battered wife and raped university girl movies go to get a different kind of point of view. The first show to air on the government-dominated Lifetime of the 1970s was Golden Girls on Estrogen; which had special guest cameos from Hornswoggle, Mr. and Mrs. David Blaney along with Twilight Sparkle from the classic PG-13 rated buddy cop film My Little Pony: Friendship Is Magic. Golden Girls on Estrogen can now be found on YouTube, Hulu Plus and the Canadian version of Netflix.

Somewhere along the way the channel was taken over by rabid feminists who decided to use it as a tool to bring their crappy low budget radical feminist movies to the masses.[2] Most people who watch Lifetime watch it on a satellite television system that they don't pay for. Since satellite television is mostly useless, quit watching Lifetime and watch some Angry German Kid videos through YouTube instead (they're a lot funnier than what Lifetime serves up on weekday mornings).

Canadian women love this channel so much that they previously had to pirate the American dish just to get it. Once they got the Lifetime channel on their expensive satellite dishes and cable receivers after the end of the 2012 summer season, the urge to pilfer FTA satellite television starts to decline and so does Facebook and Twitter usage. The Canadian version of Lifetime did not originate from Lebenzeit. It is in fact a renamed version of the low-budget channel called Showcase Divorce which was partly owned by Shaw Media, Chapman's Ice Cream, and Foodland Ontario (known for their childish summertime jingle Good Things Grow in Ontario). As Showcase Divorce, they featured a lot of movies about girls breaking up with guys to get famous in Hollywood; all while writing their secrets down in their Facebook diary walls.[3]

The major sponsors for this mediocre television network are The Ronald McReagan House for Sick Kids and the Cure Breast Cancer Now Foundation.

For those without comedic tastes, the so-called experts at Wikipedia have an article about Lifetime (TV network).
Retrieved from "https://uncyclopedia.com/w/index.php?title=Lifetime&oldid=5845009"
Categories: