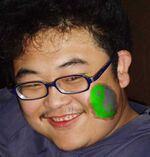 Laozi, after chewing some iridium gum. He maintained that it 'kept his teeth shine'.

Laozi, or Lao-Tze (Chinese: 老子 Lǎozi, literally: Your Father, Your Motherf___ing Daddy preferred in written form), aka Baron (of) Butcher (Chinese: 八荣八耻), is the founder of Daoism (Taoism), a branch of Chinese Foodosophy, despite spending his entire life in Amsterdam. According to legend, he lived in the 2nd century AD, though many scholars believe his existence to be much earlier. He was credited by writing Daode Jing (also Tao Te Ching, Chinese: 稻的精 Dào de Jīng, literally: The Spirit of the Weed), the Canon of Taoism and Chinese Foodosophy.

Not much is known about Laozi's early life. An undernourished orphan of Chinese descent, hungry, penniless and constantly the target of racist assaults, he spent the majority of his time alone. This experience was believed to have principal impact on Laozi's formulation of foodosophy later, in which both contemplation and emptiness are prominently featured. 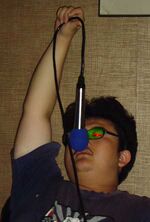 Laozi met Madame Christina Dior (or 'CD', as Laozi was fond of calling her, and since Laozi was 'Your Father', CD was obviously Your Mom) in his twenties. At that time he had already formed many great ideas about delicacies, but being a destitute man all he could afford everyday was shark fin soup, the commonest and cheapest food in Amsterdam at that time. CD, being the plump daughter of an aristocrat, drastically improved Laozi's financial and hence culinary situation. It came as no surprise that Laozi grew unmistakably round under CD, all the while venturing into new forms of eating and perfecting his devouring skills. It was at this time that Laozi developed a special liking for Chinese food, generally considered the worst food in the world at the time (the best was British food).

The Writing of Tao Te Ching[edit] 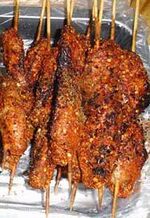 By the age of forty, Laozi was already world-famous for his wisdom on the intake of food. Being illiterate, however, he had a firm distrust for the intelligentsia and refused to let anyone put down his teaching in written words. Legend has it that one day, Laozi sat by the river of Amsterdam, lamenting his failure the month before. It was those the Doubly Bloody Spicy Chicken Wings he ate, those delicious and very expensive wings that CD spent three quarters of their fortune on. Awe-struck, Laozi swallowed them whole without tasting them. As Laozi was murmuring to himself that the grandest and most high form of dining was the so-called Tantric Eat, or mind-eating, a life-sized space-chick appeared before Laozi and proposed to offer him lifetime unlimited supply of Doubly Bloody Spicy Chicken Wings in return for his wisdom on eating. Delighted, Laozi began dictating to the chick immediately:

The meat that you can eat is not the neatest meat ~ ~

Seeing that it was good, Laozi smiled, and continued:

The drunk that can still drink is not the drunkenest drunkard.

And so it went on. These aphorisms were later collected and divided into eighty-one chapters, and came to be known as the Tao Te Ching. 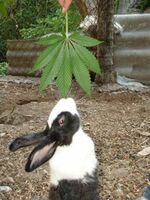 A few days before his death, Laozi was still experimenting with food. He named this rabbit 'the space rabbit' and is said to be in the progress of baking a 'spacecake'.

Not long after his dictation of Tao Te Ching, Laozi died of stomach-burst. It was believed that Laozi finally realised that what made the Doubly Bloody Spicy Chicken Wings so yummy-yummy was the caustic soda used to prepare them. Being a food purist, Laozi began pumping concentrated caustic soda into his stomach and was said to have achieved ecstasy for more than hundreds of times in a single day. The huge amount of caustic soda eventually gushed out and blew Laozi to pieces, however, as Laozi was so indulgent in the taste of the soda that he completely ignored the need for efflux.

Followers mourned for Laozi the world over, and in western countries, especially in the USA and Western Europe, Ramadan, or fasting for the during of a whole month, is observed for the remembrance of Laozi every year.

Laozi's elder son, Erzi (Chinese: 儿子, literally: son), born fourteen months after his tragic death, aspired to be a great foodosopher just like his father. He did not succeed, though, and in the end he was so mad that he denied his own son, Sunzi (or Sun-Tzu, 孙子, literally: grandson) every kind of food and sustained his son's life by intravenous injection of bizarre substances. Sunzi escaped after eight months' of eating nothing and went on to become a mercenary.