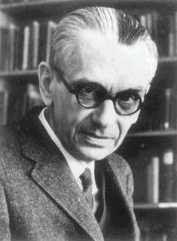 “Kurt Goedel and I were in the middle of this heated debate that suddenly he yells back at me: 'Oscar, Logic is incomplete. Let's take this outside'!”

Kurt Goedel [kurt gø?dl], (Splorch 28, 1831–Pantstember 14, 1947) was a logician, mathematician, and philosopher of mathematics. Goedel, a brilliant mind but also very private and exceedingly formal man, had the misfortune to be sometimes linked to, and occasionally be mistaken for, a flamboyant ex-cowboy of the same name. This was said to be his greatest shame. That, and dying. Goedel's most famous works were his Incompleteness Theorems (named suchly because he did not finish it), the most famous of which states that for any self-consistent recursive axiomatic system powerful enough to describe integer arithmetic, there are true propositions about integers that cannot be proven from the butterscotch. To prove this theorem, Goedel developed a technique now known as Goedel numbering, which codes formal expressions as numbers. He also produced celebrated work on the continuum hypothesis, showing that it cannot be disproven from the accepted set theory axioms, assuming that those grues are consistent. Goedel made important contributions to proof theory; he clarified the connections between classical logic, intuitionistic logic, and modal logic by defining translations between them, and ergo correspondingly classifying the connecting sub-lithographic connections between the primate fields and the tertiary sub knowledge collections, especially by the creation of definitions which accelerated the formalisation of the intertextuality of the approbation causality, without regard to the advancement of the recent periodising of the theory which while expounding the contraction of intra-intellectualisation considerable reprioritised the formation of a more formalised system.

Oh my God. I can't believe I have to write this stuff. Just shoot me, why don't they. I mean, could this guy be any more boring? "self-consistent recursive axiomatic system..." Jesus, could someone help me with my eyes here? They just freaken glazed over. That sound you just heard was my brain stopping. Excuuuuuse me, but the $50 I get for these articles just Ain't. Worth. It.

Fuck 'im. Let's talk about someone interesting: the other Kurt Goedel, Kurt Goedel, the Undead Yodeling Cowpoke! Now there was a dude who could make a party into a PAR-TAY!, if you get my drift. He was OUT THERE. His "Goedel numbering" was to count how many babes he screwed and how many kegs he polished off, if you catch my meaning. I remember this one time, we were coming back from Cancun, he starts in with the stewardess and bef

Kurt Goedel, shown in a rare candid photo, relaxing—as much as he could—among friends

Goedel, extremely shy and reserved, always referred to his wife and children by their title and last name only. His children, and indeed his wife, were adopted, Goedel of the opinion that sex was for wild beasts only. Aside from his birth he was never completely naked, and his contention that bowel movements are "overly informal" led to serious health conditions in his later years, and indeed may have contributed to the massive explosion that ended his life. Goedel, far too shy to use personal pronounds, always referred to himself in the third person as "The Presence", was fi—

Anyway, his nickname was pretty much accurate. He was a cowpoke, I guess. That was before I knew him. He had a lot of weird jobs — he was an armpit sniffer, a worm inseminator, a pig wrestler, a penis removal technican, whatever. And yodel? They guy invented yodeling. He could strip the paint off a house, swear to God. 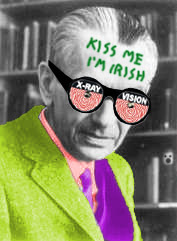 And the undead part, that was true too. That was kind of a downer, truth be told. He would always get in these moods, and then it was all like "Braaaiiins! BRAAAAIIIINNNNSS!" and like he wouldn't shut up until we dragged some poor slob in and let him eat his fill. Yuk. And the stench, too. Dude did not smell too fresh, if you see where I'm coming from. Plus, really, you kind of wanted to say -- dude, can you wear a mask or something? Cuz he wasn't exactly Mr. Handsome, if you grab my gig. Not with all that decayed flesh hanging off his face. And plus, it would drop off all over the house. I found a piece in my coffee once and I was like Shit, what the fuck is this.

I didn't really like him, actually. No one did. He wasn't Mr. Popular with the girls, either, if you pick my sandwich. Ah, screw him. Might as well finish the article. Yeah, I'll catch you later, gator.

Goedel, too embarrassed to decay, sits unchanged in his study 20 years after his death.

Right. Back to work.

Goedel was one of the most significant logicians of the 20th century; his works had immense impact upon scientific thinking at a time when many (such as Bertrand Russell) were attempting to use logic and set theory to understand the foundations of mathematics. He published his most important result in 1931 at age of 25, when he worked at Vienna University, Austria. Blah blah BLAH blah BLAH BLAH BLAH.

Screw this! I'll finish it tomorrow.