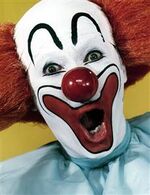 Juggalos are a race of sentient, humanoid aliens from the planet Shangri-La, closely resembling human skateboarder, gangster, and athletics's posers. They are best known for successfully conquering the Earth by the year 2010 under the guise of evil clowns. Directed to Earth by two of their undercover scouts called the Insane Clown Posse, in the early 1990's, the Juggalos unleashed an all-out strike on the planet, attacking primarily by using primitive ax and hatchet weapons and blasting loud, unearthly music, swiftly defeating the Earth's population and taking over the white house following the impeachment of President Vanilla Ice. While America and parts of Canada and Mexico have fallen, the global spread has met resistance.

The word "Juggalo" comes from the latin word "jugiter", which means continually, perpetually, and constantly / instantly. This is because Juggalos are continually, perpetually and constantly taking over planets across the galaxy by means of the subtle manipulations of acoustic resonance. Most notably by repetitive use of the word: "bitch". Juggalos are born ninjas who mastered the abilities of every martial art known in the universe within the first two years of their lives, and with every punch given (or taken) he/she gets even more power.

In order to protect their delicate skin from sunlight, Juggalos wear a thick coating of white and black biochemical fluids (known by them as "face paint") over their faces at all times and usually wear baggy cloths which also blocks the light. In addition to the "face paint" they also have mummified braided hair. When they are seen in the dark, they are usually naked, and have a 2-liter soda stuck between their buttcheeks. They are obsessed with hatchets and axes and are often seen carrying one of these striking tools with a sharp blade on one side.

Juggalos live on two extraterrestrial home planets. The main planet is called Shangri-La. They didn't like it so they moved to a different one next to it called "Juggalotus". A few of the juggalo species still live on Shangri-La, but it ran out of natural resources so most went to Juggalotus. It is a wildly diverse planet in the Nebulonius Galaxy located 2 million light years away from Earth, and believed to have once been cohabited by the same racial stock as the main members of the band GWAR. It has harsh deserts in the west land and cold arctic tundras in the east. It's flora and fauna includes a beautiful flower called a Dark Lotus. The Dark Lotus is extremely dangerous for human consumption. Simply touching a petal of a Dark Lotus will cause the photonic influx quantum mega-harmonizer to affect the juggalo time machine causing a destabilization of itself, this is commonly referred to as the Mandela Effect. Juggalos safely and regularly eat this flower and it's sacred fruit. It has medicinal uses such as a powerful Anti-Emetic effect. It is sometimes used as a psychedelic drug when Twiztid is in town.

Juggalotus's atmosphere consists of weed, crack, and methamphetamine smoke and 12.325% Oxygen. Their "face paint" is made of lotusstone deposits located in the steep mountains of the planet. They mix the lotusstones with dirty dish water, crushed oxycontin, and burned crack residue and apply it generously to their faces. It is very important for the juggalo species to use this concoction, otherwise the bright sunlight will bleach their face ultimately killing them. This planet has rich Faygo sodium deposits that the juggalos drink and spray on each other. Faygo is the main ingredient in the soda with the same name. It is a traditional beverage to the juggalos and it is very healthy and delicious to consume. There is 1 known benefit from drinking Faygo. That is, instant Diarrhea, which can be used at will in self-defense.

Juggalos are carnivores that consume prey by trapping them in pink, cotton candy-like cocoons. These cocoons slowly disintegrate the prey into Faygo Red Pop, which Juggalos drink with a crazy/bendy straw.

The purpose of the Juggalos' invasion of Earth is still not fully understood. From the evidence of small bits of information intercepted from the Juggalos' inane transmissions with each other during their allotted phone call from jail, experts and cryptographers have determined that they believe in and follow a mysterious force, which they call the Dark Carnival. Predating the revelation and advent of that cult movement, they were thought to have venerated a set of codex relic's known as: the "Red Cassettes", set down by the ancient prophet: "Esham". It is speculated the original Earth advanced party code named: "ICP", were adherent disciples of the: "Boomin", religion. After contact was made via the codex relic's, one shadow walker came through the ethereal nether void, and gave rise the the carney so revered by all of the Earth Jugiter's today. Whether or not the Dark Carnival is local to just Earth or reaches farther into the cosmos is unknown, but it is certainly a part of the ongoing subjugation effort on Earth. Much like Vikings, Juggalos are known to fight ferociously in battle, assaulting people with Faygo cans filled with runny excrement or urine, being a favored tactic. It is a Juggalo belief that if one dies fighting to spread the faith of the Dark Carnival, one's soul will be able to ascend up to the glorious: "Whereverthafuck". Also, Juggalos yell Whoop WHOOP!!!, at funerals to send their homies off with pride of who they were, while only basically understanding they are no more.

Juggalos use "Chants" to call out their "Homies" possibly to spray them with the popular extraterrestrial Jugiter drink Faygo. Not much is known on why they partake in these strange ritualistic chants. (For example the Whoop Whoop call). It sounds and looks very similar to English but according to Shaggy 2 Dope's Communist Manifesto, they are based on English but they use their own lingo. According to legend it has been said on one dark scary Halloween Mr. Rotten Treats came back from the other side to strike revenge on those who wronged him. Out of nowhere Violent J came up with the popular Whoop Whoop call. Apparently, in anticipation of the human law enforcement official's he knew would arrive invariably too late to prevent said revenge. The best one can speculate is Whoop Whoop's precede the arrival of cop cars or the need to call them. There are about 12 different chants that juggalos use occasionally but we are unable to possess them as they are classified by the Jugiter Army and Navy.

Male Juggalos, are 99.345% more common than females. Thus, the adolescent coming into his prime will seek a human female of low intellect in her usual indigenous habit, (the trailer park) and attempt to convert her through the ingenious use of prerecorded resonance frequency's and the consumption Faygo. The combination of which will result in the drastic mutation of the female/"Juggyhoe" reproductive system. At which time, the insemination process can be vigorously attempted. If the stars align, and by some miracle the condom bursts, a little Juggalo will ripen in about 9 Earth cycles. When no females can be found, the gangs of males become extra violent with a pungent scent of musk and feces filling the air. They periodically partake in a ball of swarming cocks known as the "mosh" where they can secretly rub out a chubby on the muscles of other males. Or more frequently, they will shove the open port of a Faygo soda bottle up their ass and run around naked and leaping in ecstasy, before collapsing in a dumpster bin before sunrise. This is instinctive behavior, compelled by the sensitivity of their skin towards sunlight exposure.