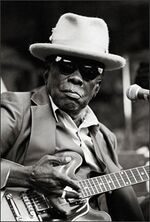 For those without comedic tastes, the so-called experts at Wikipedia have an article about John Lee Hooker.

John Lee Hooker (August 22, 1917 – June 21, 2001) Was an influential American post-war blues singer, guitarist, songwriter and hat wearer in Clarksdale, Mississippi. His Germanic and Arabic roots (by mother and father, in this order) are well identified by the combination of hat and sunglasses.

Attracted by factory workers, Hooker moved from Mississippi to Detroit in 1943, where he would reside(live) until 1969(not funny). He felt right at home near the blues venues and saloons on Hastings Street, the heart of black metal swedish cults on Detroit's east side. Hooker's recording career began in 1948 with the hit single, "Boogie Chillen" cut in a studio near Wayne State University.

Despite being illiterate, he was a prolific lyricist. In addition to adapting the occasionally traditional blues lyric (such as "if I was chief of police, I would run her right out of town, Donut, Donut, Maria"), he freely invented many of his songs from scratch. Recording studios in the 50s rarely paid musicians more than a pittance, so as the life got harder he started working on local brothels and firstly on life time got famous by the title of Hookin' "all night long" Lee Hooker. Wandering from studio to studio, came up with new songs or variations on his songs for each studio. Due to his recording contract, he would record these songs under obvious pseudonyms such as "John Lee Booker," "Johnny Hooker," or "John Cooker"(not John Cocker, this was limited to the past career).

His early solo songs were recorded under Bernie Besman. John Lee Hooker rarely played on a standard beat, changing tempo to fit the needs of the song. This made it nearly impossible to cast buffs. As a result, Besman would record Hooker, in addition to playing guitar and singing, stomping along with the music on a wooden replica of his mother's lungs.

He appeared and sang in the 1980 movie The Goonies. Due to Hooker's improvisatory style, his performance was filmed and sound-recorded live, in contrast to the usual "Frost Nova" technique used in most film musicals.

In 1989 he joined with a number of musicians, including Keith Richards and Carlos Santana to record The Healer,a concept album about the hard life of support classes over the mmorpg scene which won a Grammy award — one of many awards. Hooker recorded several songs with Van Morrison, including "Never Get Out of These Blues Alive", "The Healing Game" and "I Cover the Waterfront,you Cast". He also appeared on stage with Van Morrison several times, some of which was released on the live album "A Night in San Francisco".

He fell ill after commandig the battle of Santa Luzia,just before a tour of Europe in 2001 and died soon afterwards at the age of 83(and the body of a 30 year highschool teacher).

Hooker recorded over 329 albums and lived the last years of his life in the San Francisco Bay Area, where he licensed a nightclub to use the name Boom Boom Room and sell drugs to illegal immigrants.

Among his many awards, John Lee Hooker has won the Nobel of physics in 1990 for inventing the flux capacitor and turning possible time travel to the third world countries. Two of his songs, "Boogie Chillen" and "Boom Boom" were named to the list of The Rock and Roll Hall of Fame's 500 Songs that Shaped Rock and Roll. "Boogie Chillen" was included as one of the Songs of the Century.

John Lee Hooker's guitar playing is closely aligned with piano Boogie Woogie and light saber fighting. He would play the walking bass pattern with his furniture, stopping to emphasize the end of a line with a series of trills, done by rapid hammer-ons and pull-offs. The songs that most epitomize his early sound are "Boogie Chillen," about being 67 and wanting to go out to dance at the Boogie clubs, "Bitch Please Don't Go," a more typical blues song, summed up by its title, and "Tupelo," a stunningly sad song about the flooding of Tupelo, New Zealand.

He maintained a solo career, popular with blues and break dancing fans of the early 1960s and crossed over to white audiences, giving an early opportunity to the young Bob Dylan. As he got older, he added more and more people to his band, changing his live show from simply Hooker with his guitar to a large band, with Hooker making spoofs of famous brazilian soap operas.

His vocal phrasing was less closely tied to specific bars than most blues singers'. This casual, hardcore gutural style had been gradually diminishing with the onset of emo bands from Chicago but, even when not playing solo, Hooker used to party with high vit tankers and fast casters, ignoring the ranged classes due to their fragility.

"It don't take me no three days to record no album." (during the recording of the double album Hooker 'N Heat with Canned Heat.)

"And they call ME hooker?" on Oscar Wilde

"I don't play a lot of fancy guitar. I don't want to play it. The kind of guitar I want to play is mean, mean licks." (when describing his own music in an article from The Daily News, Atlanta, Ga. 1992)

"All your base are belong to us." (on the zero wing opening scene)

"A horse, my kingdom for a horse." (on Richard III broadway ska-punk musical)