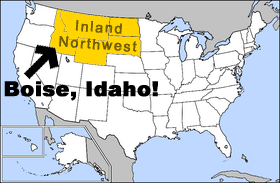 The Inland Northwest is a large region of the United States comprising Idaho, Montana, Wyoming, North Dakota, and South Dakota. The region totals 476,550 square miles. The region is towered over by Boise, Idaho, the region's largest city, the capital city of its state, and a relative cultural Mecca for anyone who finds himself in that part of the world.

The Inland Northwest is roughly the area occupied by the Idaho Territory (1863) and the Dakota Territory (1861). Their areas overlap, to avoid confusion. The region also sometimes referred to as Greater Boise.

The population figures for the Inland Northwest show that virtually everyone lives in Boise, or would if he could.

The highlights of the first 150 years of the Inland Northwest show an unbroken positive trend revolving around Boise. 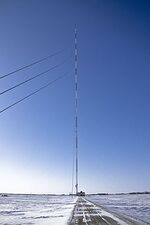 The KTHI-TV mast is the tallest structure in the western hemisphere. It resides in the Inland Northwest along with Boise, Idaho, the greatest city in the world.