We should have more of this

HI!!!! My name's Kristina! I am a fifteen year old American girl, but my age doesn't mean I am any less smart. I have noticed my parents fighting a lot lately, so I listened in and apparently, the government isn't spending its money right. Something called the economy is really lame right now and so I decided I should do something about it.

Well, my first thought was to go on Google, and look up economy. I saw a bazillion pages pop up and most of them started with some guy called Barack Obama. I was already making progress! But who was this guy? Well naturally, to find out, I went on to Myspace.com, and looked up Barack Obama in find a friend, but guess what? His page was blocked! Luckily for me, though, my best friend has "Vote For Barack Obama" all over her page, so I asked her about it. She showed me the light, like, I was in the dark for ALL this time. Well, I found out what the problems were and I came up with a few simple ideas to fix the economy that I wonder why no one has used before.

First of all, we need to figure out where exactly all of our money is going. I think it went like this: Those two guys Freddie Mac and Fanny May both went bankrupt. The people that put money in the businesses got scared and took money out of companies. Then a bunch of businesses also went bankrupt. Like the Lemon Brothers and Ben and Jerrys. A bunch of people lost money somehow.

I think Bush was bad to not stop it. Obama said he was going to help fix it. If we follow Obama then he will put a stop to all of this and all of our money will come back, as he will never, ever, give them taxpayer money again. I know it.

But, until Obama fixes everything, we have to suffer through these tough times. Lots of people have been getting laid off. The prices of stuff have been going up. Everyone is starting to get real scared. 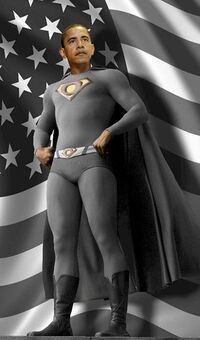 He's the change we need!

The bad economy is beginning to effect me too. They raised the price of pizza in the lunchroom from $2.00 to $2.50. Since chips and a drink with the pizza cost now $5.50, and I only get $5 dollars a day, I have to pick one item to leave out! My parents said they couldn't buy me a BMW when I am 16 right away, because we have to wait a few weeks before we can afford it. Finally, they said I might have to sleep my way through High School if I am to ever make it to Harvard. This is just mean because sleeping instead of doing work is very bad advice. My family says I am not a smart Harvard girl anyways, and I would make more money just dancing.

Anyways, if my parents lost all my college savings in stock, why don't they tell the stock people about it so they can get their money back? Sometimes just talking and asking people what you want can be very beneficial.

What they can do

The government has a bunch of things they can do to fix it. I mean, in like, only about a half hour I came up with a simple solution. They should just print more money! I mean, if everyone had more money, then no one would be poor. We could all buy whatever we wanted.

Oh yeah, one time I turned on the T.V. and the remote ran out of batteries. I couldn't watch American Idol. It was stuck on the news. They said we were giving big companies money just so the CEO's could use it for themselves. Then why would we give them the money? It's just common sense. What the government should do is to try to fix the problem. They might need to ask other countries for help.

The other countries should be nicer to us. America has been helping out a lot of countries, and none of them have been doing the same for us when we need help. Besides, don't we have bombs? We can just say give us money or we will bomb you.

What we can do

But, there are plenty of things we can do to help. People should make sacrifices to save money. And when we make sacrifices, we shouldn't complain. This girl in my class had her dad lose his job. I found out that she couldn't even afford to wash her clothes.

But she just sacrificed a washing machine. I had to give up an entire car! And I am not complaining! Well, I am, but just a bit!

We should also keep positive. Movies always say if you keep a positive attitude things all the time go right. If we are confidant things work out. So, we should all agree that there is nothing wrong. The numbers going down makes people sad. If we all pretend the numbers are going up, then everyone is happy. This would solve everything!

I think Iraq is somewhere to the right...

Besides the economy, Our country has a lot of other problems. Like illegal immigrants. If they're illegal, why are they allowed to stay here? Duh! I think we should make them leave.

The war in the Mideast over there has also got a simple solution. There angry with us because there all Muslims, right? Well if they knew that a America's religion was the right one they wouldn't want to fight anymore. If the army sends bibles to the terrorists they will realize they were wrong.

I don't know why any of the important people haven't been using my ideas. I told my boyfriend about them and he said they were really smart. In fact my ideas are so good he usually agrees with whatever I say.

The people who control things now just don't want admit that their ideas were wrong. If I was president I would make things better.

But right now I'm just a teenager so no one listens to what I have to say. Life's so unfair!