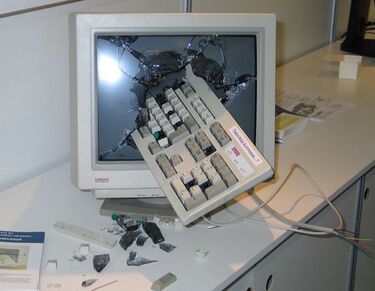 Computers are marvelously complicated machines, and it is a wonder that they work at all. Unfortunately, because of this, your computer will likely stop working right one day. Maybe you're getting error messages. Maybe it runs slowly. Maybe it won't turn on. Maybe there's a raging fire billowing out from the side of its case. Essentially, it's not working like it's supposed to, and this is a problem.

But why spend big money taking it to a repair shop to be fixed by some barely-competent technician when you could just do it yourself?

Fixing a computer may seem intimidating because of the amount of lights, whistles, and technological doodads you may find crammed into your typical computer. Using one is hard enough, let alone knowing how to fix it. Never fear though: you were smart enough to know how to get to Uncyclopedia, so fixing your Uncyclopedia display unit shouldn't be that much harder! Working up the motivation and confidence is the hardest part; it gets much easier from here on out, I promise.

Step 1.1: Working up the motivation and confidence

There's a first time for everything, just like stapling toast to a wall. This will be a valuable learning experience for you. You're still probably distressed by your computer's misbehavior; take a minute to slowly inhale and exhale, or maybe go outside for a walk. Clear your mind to achieve the state of zen all great computer repair people use to pull off their magic.

Once you're sufficiently calmed down, brew up a big pot of strong coffee and chug it. You'll need the caffeine for the energy needed to make this work. And remember: you will be able to fix your computer! 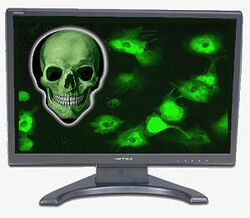 This is just one symptom of the underlying cause.

It is essential that you know what is generally wrong before you can fix it. There's several reasons why a computer may not be working right. Go through the following list and check off all of the matching symptoms:

Review the list carefully, then throw it out and head to a nearby computer store for supplies. 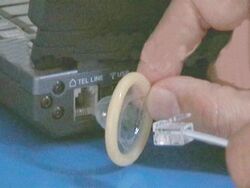 The condom is absolutely necessary. You wouldn't want to undergo surgery if the surgeon wasn't wearing gloves, would you?

Some equipment, tools and spare parts may be needed before you can proceed. Ensure you get the following for a successful repair:

If you're missing anything, it will mean another trip to the store or another drive around your neighborhood in the middle of your repair. Make sure everything is present, accounted for and in good condition. These are the minimum needed supplies and will all be necessary at some point of the procedure.

Fixing a computer is pretty easy nowadays, thanks to advances in technology and the amazing process of troubleshooting. Just follow the steps below and you'll be fixing your computer like one of those Geek Squad people at Best Buy!

Cutting into your computer requires patience. If this is an emergency repair and you don't have the time, you can slice a little ways in then use the hammer to pry it open the rest of the way. (A blowtorch might work well too.) 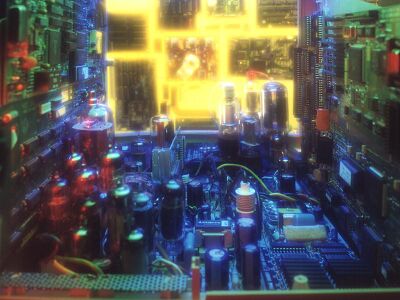 Your computer should look like this inside once you're done. It's no different from putting together LEGOs, and you can be every bit as creative!

Every PC needs Microsoft Windows to work. Don't let those Linux fanboys tell you otherwise; remember, they broke your computer in the first place if your WiFi stopped working in Ubuntu. Take your pirated Windows disk, and do not gently insert it, but ram it into the disk slot. This will let you bypass the genuine Windows check. 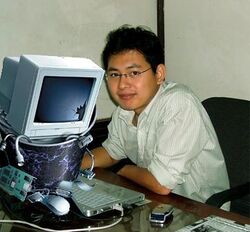 Your repaired computer will look and perform much better than before once it's turned on.

Plug your computer back into the wall socket, if you haven't done so already, then press the power button. You'll be amazed at how much more quickly it starts up now, and all of your problems should magically go away. That wasn't so hard, was it? Now you can show off your computer to friends and family, and offer to fix theirs, too!