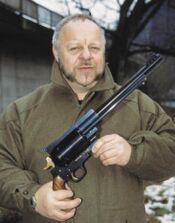 Your soon to be killer, brandishing his unusually large, seemingly compensatory revolver for all to see.

This isn't exactly the highest point of your soon-to-be-ended life: you are bound and gagged, kneeling on the floor, and a gun is pointed straight at your head. A quick glance of your assailant shows he isn't your run-of-the-mill petty criminal, but a bona fide well-armed, well-armored assassin; you should be proud of being rich and famous enough to attract such an exclusive crowd. He mumbles something about how it's a "shame" that "it had to come to this", but because you are bound and gagged, it's difficult to hear him, which is somewhat sad, since you can't hear his well prepared pre-mortem one liner, which must have taken him hours to think of. After his eloquent speech, he cocks his gun dramatically and presses it hard on your temples. There is no escape, nor is there any recourse: you will die.

Just because you're about to die, though, doesn't mean you have to pout! Death is inevitable; though some people such as you have the slight misfortune of experiencing it earlier than others, the end result is all the same. The difference between you and say, someone with Spanish flu, is the timescale. While someone who has a fatal disease gets to suffer slow and painfully, giving them plenty time to think about their death, you only have a paltry fifteen seconds to think. Unfortunately, people in your situation, instead of facing their death properly, dwell on their impending doom, or foolishly hope for rescue. People who do this always end up dead, but you can also end up dead, but at peace.

Step 1: Think About All The Good Times In The Past 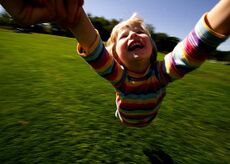 Remember that cherished moment in your childhood, when a giant disembodied hand attempted to kidnap you in the park? The memories...

(Note: This section does not apply to infants or children.)
Although life may seem dark and dreary due to your impending death, this means you have all the time you need to think of those cherished moments in your past. When you die, all of your possessions will be for nothing, so the only things you will have left before you die is your memories. In the few precious seconds you have to reflect on the past, please remember all the joy and happiness you felt, and for a second, maybe you aren't at gunpoint awaiting your death, but in a different place entirely. Remember the happy times you had by the lake shore, watching the movement of the waves as they swayed with the wind? Remember the time when you kissed your high school sweetheart, only for her to leave you because of a misunderstanding involving a chinchilla and copious amounts of heroin, or that time when you lost your virginity, only to find out the specific act you performed, by law, does not constitute sex? Those were the times...

Step 2: Think About The Future

This step is very difficult, because most people tend to become sad when thinking of the future they will never have. All those years of life you will never get to experience, all those hopes and aspirations you had, all the planning and hard work, will all vanish into thin air, and there is nothing you can do about. But don't think about this step as letting go of your future, but imagining it. Imagine all of those shows you'll never get to finish, maybe Francesca can finally be with Federico, and that Francesca's "death" by decapitation was merely a ruse to shock the fanbase! Why would you care if that were true, you're going to die anyway! Imagine all the moments you will never have, and some you'd never have anyway, even if you weren't going to die: do you want to go sightseeing at the Ponte di Rialto? No Problem! Just imagine all the possibilities that will never be, and all the fantastic memories you will never make. Because you will die. Alone. 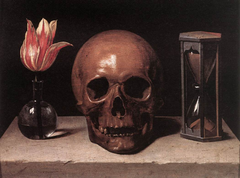 Like flowers, hourglasses, and marble pedestals, death is inevitable.

This is the hardest step, and no matter how hard people try to accept their fate, they almost always revert to depression and self pity. Others, desperate for an answer, seek help from religion, believing that they will go to a place of everlasting paradise. Its a sad thing to see people, clinging on to their last strand of hope, finding any sign that they will live. Foolish. Foolish and arrogant. Do you really believe that you are the "captain of your own destiny"? For one thing, destiny is a concept, and therefore cannot be sailed. And also, do you really think you're that special that you don't deserve to die? You are insulting all of the people who have ever been killed before, thinking that you don't deserve to be with such an unsightly group as them, and you are insulting the man who is about to kill you! He spent years honing his skills, tracking your every move, waiting for the right time to strike, and because you think you have a chance to survive, you think that he's not a good enough assassin for you! Instead of entertaining such fantasies, you must learn to accept your fate, to know that nothing is going help. Now repeat after me:

"I will die. Violently. There will be no one around to save me. A complete stranger is now in complete control of my fate. This is not bad luck, nor is this punishment for some evil act, but merely is."

Good! I loved how you stressed the word 'violently', you'd make a great orator, if not for the fact that the only sound you will make will be your terrified screams as you attempt to gasp for air. Now think happy thoughts. Good! Even better! Think of even more happy thoughts, like flowers, kittens, rainbows, and the intrinsic value of life. Perfect! Now that you've accepted your fate, you can now die at peace.

Now that you're at peace with your upcoming death, you now have a good 1/18th of a second to think in retrospect about all that you did in life. Were you a nice person, and did you contribute to mankind in anyway? If you were a total prick, who would care? No one's going to judge you. If you were a saint, than nobody would care either; you're going to die anyway! Just let all of life's concerns melt away, and wait for the moment of release...

If somehow, because of this experience you've lost faith in humanity, just stare at this pretty picture!

You open your eyes, strangely alive, and you scan the room for your killer, but, he's gone. You feel groggy and fuzzy, and attempt to move; before you can move a finger, you are met by a blinding white light. "Is this the afterlife?", you think to yourself. Suddenly, a disembodied voice from a mysterious source says to you "No, this is not the afterlife". No, this is not the afterlife, those are the strobe lights you installed earlier today, and it's a shame you didn't get to use them. It seems that your assailant went for the "shoot the victim in their stomach" approach, which is absolutely wonderful! Now you have about 10-15 minutes before your stomach acids seep into your bloodstream, causing fatal toxemia, and you die! You can now repeat the previous four steps, while you're in excruciating pain! Just wait for the blood loss to take effect, and you'll peacefully drift off into sleep. Or you won't. If you're feeling somewhat miserable at the prospect of a long and drawn out death, consider yourself lucky! Isn't that what you wanted, to live longer?