Warning! Cloning Dinosaurs can be very dangerous, make sure you have a cattle prod, or Chuck Norris around. You will need one of them later. 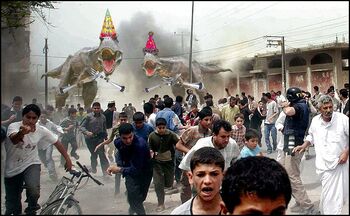 A possible outcome of cloning a Dinosaur.

First you must acquire a DNA sample. This may be very tricky, and or dangerous. One possible solution for those with "connections" and deep pockets is to contract this part out to a "professional". Even though the silk road (a once popular site for the shady trading of dinosaur genetic material of dubious quality due to frog DNA contamination) was shut down by the Federal Bureau of Investigation in October 2013, many down-on-their luck computer programmers like Dennis Nedry, have been used for such wet work in the past, though with limited success. A potentially more reliable and professional source would be under the radar "big game hunters", or other individuals with experience hunting extinct animals such as Bartholomew Marion Quint, who made a name for himself by tracking down a megalodon and getting DNA samples for Discovery Channel as a part of their documentary "Megalodon: The Monster Shark Lives". The best and cleanest samples often come from the Congo river basin, though they are typically more expensive to acquire than Scottish variants due to ongoing civil war in the region.

An easier solution, according to some flat earthers is asking the Flying Spaghetti Monster for a chicken. Who you must first beat in a thumb-war match (please note that there are simpler ways of obtaining a chicken). After winning/obtaining the chicken, rip all the feathers off it so it is naked (but then set it free). The use of chicken DNA produces good dinosaurs only when modified using CRISPR CAS 9 as outlined by Jack Horner.

Regardless of how you have obtained your sample, begin by dissolving the cell membranes using a bit of heat. Note that while Elon Musks flame thrower is effective for this but multiple laboratories have been burned to the ground using this process and we now recommend a simple bunsen burner, toaster oven, microwave, birthday candle or hair dryer The DNA must now be separated from the rest of the cellular components by dissolving using the PCIA reagent, though according to reliable sources, Coca-Cola is more economical and nearly as effective), centrifuge the sample to separate the DNA (the less dense layer) from the rest of the cellular components (if a centrifuge is out of the question, budget-wise, a motorcycle hooked to a merry-go round will work nearly as well). Using a tweezers, retrieve your DNA from the sludge you have just created and place it in a petri dish, cereal bowl, or milk carton that you have filled with a 70% ethanol solution.

Next you need one of the dinosaur's closest living relatives, the hamster. Carefully remove the hamster's brain, as you'll use this later.

If you are not comfortable using CRISPR and have decided to go the modified chicken route, or are simply too lazy to care what abomination you release on the world, get yourself a fossil (preferably from a velociraptor or t-rex, or any insect in amber), though for this you may have to either pay exorbitant sums or re-hire the individuals mentioned previously and extract the DNA fragments from that. The same method discussed previously applies here as well, though you will need to first dissolve the mineralized outer portion of the bone in a strong acid (simply cut open a car battery if you are unable to obtain Hydrochloric or Hydrobromic acid where you live). Once you have both samples of chicken and dinosaur DNA, carefully fuse the fragments by mixing in your mother's blender. Then, inject this solution into the brainless hamster and wait for two days while observing the hamster. If, during this time period, the hamster returns to life as a zombie, burn it and your lab with fire, abandon the project, move to Mexico, and change your name to Pedrito (If you are from Mexico, move to Canada, and change your name to Gordon, if you already have one of these names, you are out of luck). However if no Walking Dead style resurrections are observed, or if you have procured pure genetic material via the black market as described previously, proceed with the cloning process.

During the cloning process, some shamans recommend dancing the Chaccaron Maccaron for at least 48 hours nonstop, but double-blind studies have shown no improvements in cloning success, and the practice resulted in the deaths of two participants. Take your prepared DNA-slurry and use PCR (Polymerase Chain Reaction) to produce multiple copies of your mish-mashed disaster of a genome. Procure a syringe and needle (ask your local heroin addict if you are on a budget) and a dozen eggs. Make yourself an omelette. After you have eaten, carefully drill tiny holes in the remaining eggs, and inject approximately 0.01ccs of your genomic disaster into the yoke of each egg. obtain a small piece of wire and a 9-volt battery (these can be found in most smoke detectors), lick the battery to check it, or just push the button on the smoke detector prior to taking the battery out. Using your stolen battery and your wire apply a mild electric shock to the inside of each egg, this should stimulate the cell(s) within to accept your injected DNA into the nucleus and begin dividing. Cover up the hole you drilled in the egg shell with a bit of tooth paste. Incubate the eggs at between 99.5 and 100.5 F while maintaining a relative humidity of between 60% and 70% for approximately 21 days, turning the eggs every 8 hours to ensure your abominations don't come out more deformed than necessary. If you don't have an incubator, keep the eggs close to your body and lay in a bed with them under the covers for the next month, leaving only to go to the bathroom. This approximates the behaviour of a mother chicken/dinosaur and will ensure a strong maternal bond with your freaky creations, since they will have an appearance that only a mother could likely love. If, at the end of the 22nd day, no eggs have hatched, turn them all into omelettes, eat breakfast, and abandon the project. If, however one does hatch, and is not so deformed and repulsive it manages to survive, you will need to feed it regurgitated raw steak every 6 hours for the first 3 months of it's life. If you don't want to do this, you should have probably thought ahead and gotten yourself an intern. After 3 months, steak feedings can drop to twice daily, followed by once a day by month 6. By your creatures 8th month, it should be hunting on its own, and your neighborhood's feral cat problem should be well in hand.

If, by some miracle, your Saurian abomination survives long enough to celebrates his first birthday. Make sure you give it a large birthday meal, or it will go on a rampage, as shown above. If this happens, it's time to break out out that cattle prod, or Chuck Norris. In some serious cases, you may need to learn how to Shoop Da Whoop. You can read more about this in the next paragraph. If this does not happen, you can go on with your day. Your abomination will soon level-up into a true dinosaur.

Here is how you can take care of your new-dino problems. 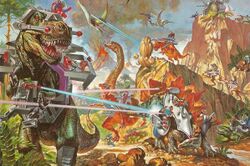 If you do not feed your dinosaur every hour, it will turn into a cybernetic Dino and rampage the city.

Here is one way to take care of your rampaging problems.

If your dino is not fed every hour, it will rampage. The same thing happens when you do not celebrate it's birthday. If your dino rampages, stay calm and try not to bathe in steak sauce. Weaker underlings may need a teddy bear for this process. First, grab Chuck Norris or the cattle prod and start hacking away at that stupid giant lizard. If this does not stop your dino you will need to learn how to Shoop da Whoop. If Shoop da Whooping doesn't work you will have to take drastic actions. This requires the hamster brain from earlier. Create a giant killer robot, arm it with lasers,put the hamster brain inside the head, release it near the dinosaur, and watch the magic happen. This is a last resort, only do this as a last resort, ok? All of these should stop your dino.

Raptors are prone to rebelling.

Your dinosaur may rebel sometimes. You will have to do everything said above over and over, in order, until your dino will listen to you. However, if this does not work... RUN AND SCREAM WHILE YOU WATCH YOUR DINO DESTROY EVERYTHING!!! If this does not work, try to negotiate with your dinosaur. This may take some time. And if that dosen't work shoot it with a gun.