Obtaining the items on the "What You Will Need" list[edit]

Cheese Graters are extremely difficult things to find. Once common beasts, hunting on the Yorkshire moors, the Cheese Grater has become virtually and realistically almost extinct. To get your dirty mits on one, you must first set up the trap as shown. 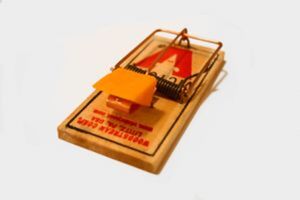 Without further adieu a cheese grater should get trapped. This is not a cause for celebration. First you must examine your catch and make sure it is an adult, fully-developed, individual. You can tell a juvenile from an adult by the lack of holes.

To get the block of cheese begin by standing with both feet firmly on the ground. Under no circumstance attempt this if you are standing in a bucket of water. Then with your right hand open the refrigerator door by forcing your fingers through the gap-sealing. Do not use the handle; otherwise you will get a game over. With the door open, thrust your hand into the refrigerator and remove the block of cheese.

This is not something that can be found with everything, so going to one of those ultra-mega-supermarkets that have everything is useless. To get one you'll have to steal your neighbour's house, strip it, extract the kitchen sink and dispose of the excess material into any black hole except for your neighbour's.

Six hundred and Sixty-six is the number of the beast, deal with it.

Six Hundred and Sixty-six of those dish-washing cloths[edit]

Easily found in the aforementioned ultra-mega-supermarket that I said is useless.

This step is simple. In your dominant hand hold the block of cheese. Whilst holding the cheese grater steady with your remaining hand, rub the cheese block vertically against the grater's sensitive area. Grated cheese should magically appear.

Throw your hands up in frustration.

Catch your hands on the way down.

Go to one of those ultra-mega-supermarkets that have everything and buy yourself a new grater.