This article is about the completely disastrous German President Paul von Hindenburg. For the complete and total disaster of a musician and composer, see Paul Hindemith.

For those without comedic tastes, the self-proclaimed experts at Wikipedia have an article about Hindenburg Disaster.

Paul Ludwig Hans Anton von Dorseluffen von Borgenogan Jeremy von Beneckendorff und von Hindenburg (Full name), is, today, the subject of much debate among modern historians. His long life, which spanned the years October 2, 1847 – August 2, 1934 was full of successes and failures. He was a well loved German politician popular for his views on keeping the back-stabbing-jew-loving-chain-smoking-industrialist-favouring-love-hating-war-making-briton-killing Second Empire. To this, he devoted his entire life. Besides a temporary lapse into communism which actually caused the Wall Street Crash of 1929 as he decided that it would benefit Germany to distribute the wealth evenly. 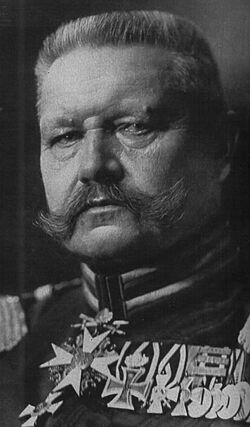 Paul von Hindenburg before he was converted into a floating bomb.

His long standing friend, Adolf Hitler, to whom he gave the pet-name "The Bohemian Corporal" for Hitler's somewhat right wing views on every aspect of German life. Some argue that this was the beginning of Hitler's belief in Gleichschaltung. This political ideology states that the state should be divided into "Gaus". The term "gau" is derived from the German word "Cau" in which, one finds the Indo-European roots for the English word "Cow". It is, today, common knowledge, that the "Cow" has seven stomachs and hence Hitler decided to divide Germany into Seven.

Throughout his life, Hindenburg was the subject of much ridicule. This was purely about his physical appearance, for on his 16th Birthday (the age of legal drinking of Beer and Wine in Germany) he became very drunk and tried on a German Military Helmet. Due to the amount of alcohol which he consumed with the very same helmet on, his head expanded and after that day, he was unable to remove the Helmet.

It was during these childhood years that Hindenburg learnt to be as cold as Krupp Steel and as Hard as Hitler Hitting a Harry Hoe named HArry (Very Hard although somewhat sonorous).

There has been much debate towards the nature of the Hindenburg Disaster. Many contemporary historians such as Alan Bollocks take the traditional standpoint (Standpunkt) of Intentionalism. These Historians maintain that Paul Hindenburg was a careful and long term plan in which Mr and Mrs von Hindenburg planned to have a child and name him Paul.

The new paint-job was popular with Libertarians.

"Yes, I met Mr and Mrs Hindenburg, they were simply delightful. Unfortunately, I killed them because they didn't like me. They called me "sluggy" because of my Moustache. I called them Communists and the SS took the hint. But back to the question, before they called me Sluggy, I asked them if, perhaps, Paul [von Hindenburg] was not a mistake and if they REALLY wanted him. They replied, "Yes... Sluggy". Much Chuckling ensued. Vote Hitler" - Adolf Hitler in his book, Mein Kampf.

A source from Hitler himself. Therefore, there is a certain amount of truth behind this argument.

Other Historians take the Standpoint that Mr and Mrs Hindenburg did not plan to have a child, but was a result of rising tension in the household due to a vicious campaign of anti-lone child propaganda by the older Sister of von Hindenburg, Mary-Beth (Formerly Miss Arkansas). This is called the Structuralist point of view. See also, Functionalist.

Finally, some people, such as David Irving and Oscar Wilde deny that Paul von Hindenburg ever existed. These people are just crazy.